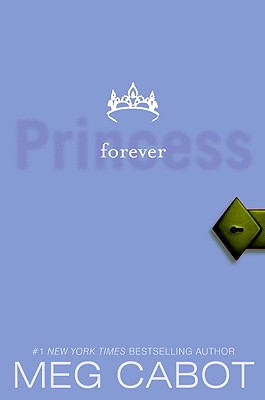 This is book number 10 in the Princess Diaries series.

It's Mia's senior year, and things seem great. She aced her senior project, got accepted to her dream college(s), and has her eighteenth birthday gala coming up . . . not to mention prom, graduation, and Genovia's first-ever elections. What's not to love about her life? Well . . . everyone adores her dreamy boyfriend, J.P., but Mia is not sure he's the one. Her first love, Michael, is back from Japan . . . and back in her life. That senior project? It's a romance novel she secretly wrote, and no one wants to publish it. And her father is losing in the Genovian polls—to Mia's loathsome cousin René!

With not just Genovia's but her own future hanging in the balance, Mia's got some choices to make. And what she decides might determine not just the next four years but . . . forever!

Forever Princess is the tenth book in the beloved, bestselling series that inspired the feature film starring Anne Hathaway and Julie Andrews. Beautifully repackaged in paperback, this title will appeal to new readers as well as fans looking to update their collection.

Meg Cabot’s many books for both adults and tweens/teens have included multiple global and #1 New York Times bestsellers, selling over twenty-five million copies worldwide. Her Princess Diaries series has been published in more than 38 countries and was made into several hit films by Disney. Meg is still waiting for her real parents, the king and queen, to restore her to her rightful throne. She currently lives in Key West, FL, with her husband and various cats.