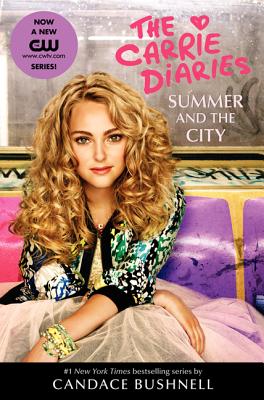 This is book number 2 in the Carrie Diaries series.

This sequel to The Carrie Diaries brings surprising revelations as Carrie learns to navigate her way around the Big Apple, going from being a country "sparrow" to the person she always wanted to be.

With her signature wit and sparkling humor, Candace Bushnell reveals the irresistible story of how Carrie met Samantha and Miranda, and what turned a small-town girl into one of New York City's most unforgettable icons, Carrie Bradshaw.

Summer is a magical time in New York City, and Carrie is in love with all of it—the crazy characters in her neighborhood, the vintage-clothing boutiques, the wild parties, and the glamorous man who has swept her off her feet. Best of all, she's finally in a real writing class, taking her first steps toward fulfilling her dream.

But as it becomes increasingly difficult to reconcile her past with her future, Carrie realizes that making it in New York is much more complicated than she ever imagined.

Anyone with a dream, or anyone who has wanted to create a fabulous new life, will want to follow Carrie’s adventures in glam, gritty New York City. AnnaSophia Robb starred as sixteen-year-old Carrie in the TV adaptation of the Carrie Diaries series.

Candace Bushnell is the critically acclaimed New York Times bestselling author of The Carrie Diaries, Sex and the City, Is There Still Sex in the City?, Lipstick Jungle, One Fifth Avenue, 4 Blondes, Trading Up, and Summer and the City, which have sold millions of copies. Sex and the City was the basis for the HBO hit shows and films, and its prequel, The Carrie Diaries, was the basis for the CW television show of the same name. Lipstick Jungle became a popular television show on NBC. Is There Still Sex in the City? is in development with Paramount Television. Candace lives in New York City and Sag Harbor. Visit her at www.candacebushnell.com.

“If ever a book resounded with positive messages for young people, it’s this one.” — USA Today

“Fans of the franchise will want to learn more of Carrie’s coming-of-age experiences and will appreciate the sly wit that sometimes shines through-repartee at parties is occasionally priceless; others might enjoy imagining themselves in Carrie’s freewheeling demi-adult world. ” — Kirkus Reviews

“The 1980s Manhattan setting is vividly realized, while Carrie’s friendships, doubts, joys, and truisms are relatable and revealing for teens and recognizable for adults. Both audiences will flock to this installment, like Carrie to Chanel.” — ALA Booklist

“While this book clearly has a built-in audience of adult readers and older teens who are fans of the show and Bushnell’s adult books, there’s also something here for anyone who has ever wished to build a fabulous new life and, especially, for aspiring writers.” — School Library Journal

“‘Summer and the City’ is Grade-A chick lit from one of its masters.” — Los Angeles Times

“An enjoyable romp of a read.” — Entertainment Weekly

Praise for THE CARRIE DIARIES: “Carrie’s sharp observations of her peers and human relationships give the book smart, sassy intellectual power.” — Kirkus Reviews

Praise for THE CARRIE DIARIES: “Fans will love this.” — Booklist