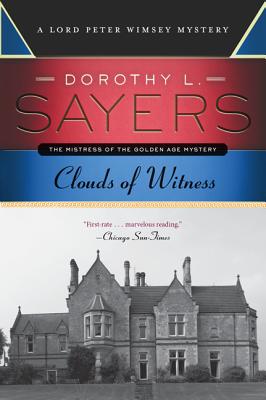 The great Dorothy L. Sayers is considered by many to be the premier detective novelist of the Golden Age, and her dashing sleuth, Lord Peter Wimsey, is one of mystery fiction’s most enduring and endearing protagonists. In Clouds of Witness, the fiancé of Lord Peter's sister, Mary, is found dead outside the conservatory of the Wimsey family's shooting lodge in Yorkshire. The evidence points to their older brother, Gerald, the Duke of Denver, who is charged with the murder and put on trial in the House of Lords.

To clear the family name, Lord Peter and his close friend Inspector Charles Parker scour the lodge's grounds, finding several tantalizing clues, including mysterious footprints, a piece of jewelry, and a cat charm. What do these leads mean, and why are Mary and Gerald suddenly acting so mysterious? Unraveling a string of coincidences, Lord Peter is determined to solve this intriguing case. But will the answer save his brother . . . or condemn him?

Dorothy L. Sayers was born in 1893. She was one of the first women to be awarded a degree by Oxford University, and later she became a copywriter at an ad agency. In 1923 she published her first novel featuring the aristocratic detective Lord Peter Wimsey, who became one of the world's most popular fictional heroes. She died in 1957.