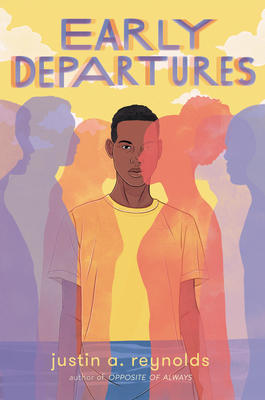 Like Adam Silvera’s They Both Die at the End and Colleen Hoover’s It Ends with Us, Early Departures by Justin A. Reynolds, author of Opposite of Always, is a powerful and deeply moving YA contemporary novel with a speculative twist about love, death, grief, and friendship.

What if you could bring your best friend back to life—but only for a short time?

Jamal’s best friend, Q, doesn’t know that he died, and that he’s about to die . . . again. He doesn’t know that Jamal tried to save him. And that the reason they haven’t been friends for two years is because Jamal blames Q for the accident that killed his parents.

But what if Jamal could have a second chance? A new technology allows Q to be reanimated for a few weeks before he dies . . . permanently. And Q’s mom is not about to let anyone ruin this miracle by telling Q about his impending death. So how can Jamal fix everything if he can’t tell Q the truth?

Early Departures weaves together loss, grief, friendship, and love to form a wholly unique homage to the bonds that bring people together for life—and beyond.

Justin A. Reynolds has always wanted to be a writer. Opposite of Always, his debut YA novel, was an Indies Introduce selection and a School Library Journal Best Book and has been translated into nineteen languages. His second YA novel, Early Departures, was a Kirkus Reviews Best YA Book of the Year. His debut middle grade, a Miles Morales graphic novel titled Shock Waves, was an indie bestseller. Justin is also the cofounder of the CLE Reads Book Festival, a Cleveland book festival for middle grade and young adult writers. He hangs out in northeast Ohio and is probably somewhere right now dancing terribly. You can visit him at www.justinareynolds.com

"A page-turning narrative with a cast of fully realized characters and realistic dialogue. The skillful use of flashbacks and social media content fully engages readers. Despite the seriousness of the story, humor and moments of pathos will elicit empathy and connection. This thoroughly satisfying novel of love, loss, and reconciliation is not to be missed." — Kirkus Reviews (starred review)

“This charming, wry novel packed with witty, crackling banter is propulsively readable. There are some big questions about choice, consequences, loyalty, and love in this novel, and Reynolds beautifully complements those heavy concerns with the sweet, funny, and genuine voice of his protagonist. — Booklist (starred review)

"Will have readers dying with laughter as Reynolds miraculously finds a way to couple tragedy and comedy. Highly recommended for anyone who is searching for light at the end of the tunnel." — School Library Journal (starred review)

"Weaves themes of friendship and tragic loss into a sensitive tale of two teens who have lost their way in the midst of grief and misunderstanding.  The author also deftly uses humor throughout this fast-paced, engagingly written book, providing levity in a story dealing with heavy issues such as death, reconciliation, and learning how and when to let go." — Horn Book Magazine

Praise for Opposite of Always: Opposite of Always  is as beautiful as it is funny, warm, and captivating. One of the best love stories I’ve ever read. Jack King is the hero we’ve been waiting for.” — Angie Thomas, #1 New York Times  bestselling author of The Hate U Give

“Read this one, reread it, and then hug it to your chest. Reynolds’ debut is wise, heartfelt, and wildly, infinitely charming.”   — Becky Albertalli, #1 New York Times  bestselling author of Simon vs. the Homo Sapiens Agenda  and Leah on the Offbeat