The Operator: A Novel (Hardcover) 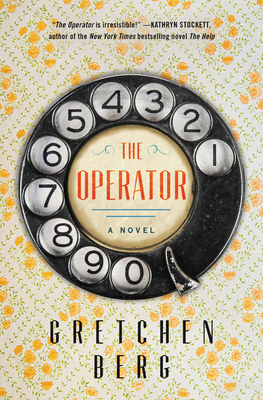 "What if you could listen in on any phone conversation in town? With great humor and insight, The Operator by Gretchen Berg delivers a vivid look inside the heads and hearts of a group of housewives and pokes at the absurdities of 1950s America, a simpler time that was far from simple. Think The Marvelous Mrs. Maisel in the suburbs with delicious turns of jealousy, infidelity, bigotry, and embezzlement thrown in for good measure. The Operator is irresistible!" —Kathryn Stockett, author of the New York Times bestselling novel The Help

A clever, surprising, and ultimately moving debut novel, set in a small Midwestern town in the early 1950s, about a nosy switchboard operator who overhears gossip involving her own family, and the unraveling that discovery sets into motion.

In a small town, everyone knows everyone else’s business . . .

Nobody knows the people of Wooster, Ohio, better than switchboard operator Vivian Dalton, and she’d be the first to tell you that. She calls it intuition. Her teenage daughter, Charlotte, calls it eavesdropping.

Vivian and the other women who work at Bell on East Liberty Street connect lines and lives. They aren’t supposed to listen in on conversations, but they do, and they all have opinions on what they hear—especially Vivian. She knows that Mrs. Butler’s ungrateful daughter, Maxine, still hasn’t thanked her mother for the quilt she made, and that Ginny Frazier turned down yet another invitation to go to the A&W with Clyde Walsh.

Then, one cold December night, Vivian listens in on a call between that snob Betty Miller and someone whose voice she can’t quite place and hears something shocking. Betty Miller’s mystery friend has news that, if true, will shatter Vivian’s tidy life in Wooster, humiliating her and making her the laughingstock of the town.

Vivian may be mortified, but she isn’t going to take this lying down. She’s going to get to the bottom of that rumor—get into it, get under it, poke around in the corners. Find every last bit. Vivian wants the truth, no matter how painful it may be.

But as Vivian is about to be reminded, in a small town like Wooster, one secret usually leads to another. . . .

Gretchen Berg was born on the East Coast, raised in the Midwest, and spent a number of years in the Pacific Northwest. She has taught English in South Korea and in Northern Iraq and has traveled to all the other continents. A graduate of Iowa State University, she lives in Chicago, Illinois. The Operator is her first novel.

“I finished reading The Operator in an unstoppable rush and it was every bit as glorious, gossipy, delicious, and perfect as I’d hoped. Absolutely heaven!” — Jill Mansell, New York Times and USA Today bestselling author of Maybe This Time

"In this well-plotted comic drama of small-town life, Berg combines the technicolour gloss of a Cary Grant film with the humdrum humour of Garrison Keillor. She keeps the surprises coming right until the end."  — Daily Mail (UK)

"Berg's debut novel captures the plucky spirit of a 1950's telephone operator, the charm of a Midwest small town, and the secrets that threaten to change both of them forever . . .  . Fans of Fannie Flagg or Katerina Bivald's The Readers of Broken Wheel Recommend will soak up the small town flavor. — Booklist

"With great humor and insight, The Operator by Gretchen Berg delivers a vivid look inside the heads and hearts of a group of housewives and pokes at the absurdities of 1950s America, a simpler time that was far from simple. Think 'The Marvelous Mrs. Maisel' in the suburbs -- with delicious turns of jealousy, infidelity, bigotry, and embezzlement thrown in for good measure. The Operator is irresistible!" — Kathryn Stockett, author of the New York Times bestselling novel The Help

“Berg's storytelling is warm, sympathetic and witty. . . . There are more than enough quotable lines to fill a couple of reviews.” — Kirkus Reviews

“[W]hat began as an unassuming story about life in a small town turns into an exploration of identity and family in 1950s Ohio. . . . highlights the diversity of life experiences often overlooked in recollections of the time. This original look at Midwestern life is recommended.” — Historical Novel Society

“The Operator is a fun, light and intriguing story, [with] several edge-of-your-seat moments . . . Berg does succeed at making the reader want to keep turning the pages to find out Vivian’s big secret – as well as the consequences when all is revealed.” — Associated Press