The Man Who Lived Underground: A Novel (Paperback) 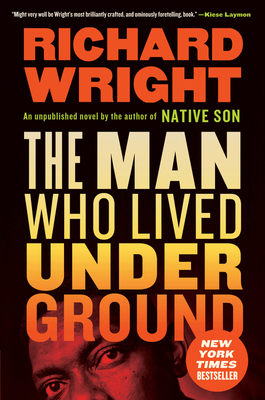 From the legendary author of Native Son and Black Boy, the novel he was unable to publish during his lifetime—an explosive story of racism, injustice, brutality, and survival. "Not just Wright's masterwork, but also a milestone in African American literature . . . One of those indispensable works that reminds all its readers that, whether we are in the flow of life or somehow separated from it, above- or belowground, we are all human." (Gene Seymour, CNN.com)

“The Man Who Lived Underground reminds us that any ‘greatest writers of the 20th century’ list that doesn’t start and end with Richard Wright is laughable. It might very well be Wright’s most brilliantly crafted, and ominously foretelling, book.”—Kiese Laymon

Fred Daniels, a Black man, is picked up by the police after a brutal double murder and tortured until he confesses to a crime he did not commit. After signing a confession, he escapes from custody and flees into the city’s sewer system.

This is the devastating premise of Richard Wright's scorching novel, The Man Who Lived Underground, written between his landmark books Native Son (1940) and Black Boy (1945), at the height of his creative powers. Now, for the first time, by special arrangement between the Library of America and the author’s estate, the full text of the work that meant more to Wright than any other (“I have never written anything in my life that stemmed more from sheer inspiration”) is published in the form that he intended, complete with his companion essay, “Memories of My Grandmother.” Malcolm Wright, the author’s grandson, contributes an afterword.

Richard Wright won international renown for his powerful and visceral depiction of the black experience. He stands today alongside such African-American luminaries as Zora Neale Hurston, James Baldwin, and Toni Morrison, and two of his novels, Native Son and Black Boy, are required reading in high schools and colleges across the nation. He died in 1960.

“The Man Who Lived Underground reminds us that any ‘greatest writers of the 20th century’ list that doesn’t start and end with Richard Wright is laughable. It might very well be Wright’s most brilliantly crafted, and ominously foretelling, book.”  — Kiese Laymon

"The power and pain of Wright’s writing are evident in this wrenching novel. . . . Wright makes the impact of racist policing palpable as the story builds to a gut-punch ending, and the inclusion of his essay “Memories of My Grandmother” illuminates his inspiration for the book. This nightmarish tale of racist terror resonates." — Publishers Weekly

“Propulsive, haunting. . . . The graphic, gripping book ends with a revealing companion essay that further explains the themes of this searing novel.” — Oprah Daily

"It's impossible to read Wright’s novel without thinking of this 21st-century moment. . . . Wright deserves sensitive reconsideration, especially now that so many of us have been proved naive in our belief that an honest rendering of Black people might lead to recognition of our existence in the universality of humanity."  — Imani Perry, The Atlantic

"Finally, this devastating inquiry into oppression and delusion, this timeless tour de force, emerges in full, the work Wright was most passionate about, as he explains in the profoundly illuminating essay, 'Memories of My Grandmother,' also published here for the first time. This blazing literary meteor should land in every collection."  — Booklist (starred review)

"Not just Wright's masterwork, but also a milestone in African American literature . . . The Man Who Lived Underground is one of those indispensable works that reminds all its readers that, whether we are in the flow of life or somehow separated from it, above- or belowground, we are all human." — Gene Seymour, CNN.com

"Like a telegram from mid-century America warning us about our very present, Richard Wright’s novel arrived with the shock of recognition for readers in the midst of a reckoning with racial injustice." — Time Magazine

"To read The Man Who Lived Underground today . . .  is to recognize an author who knew his work could be shelved for decades without depreciation. Because this is America. Because police misconduct, to use the genteel 2021 term, is ageless." — Chicago Tribune

"Moves continuously forward with its masterful blend of action and reflection, a kind of philosophy on the run. . . . Whether or not The Man Who Lived Underground is Wright’s single finest work, it must be counted among his most significant." — Clifford Thompson, Wall Street Journal

“Enthralling. . . . You could say that the book’s release now is timely, given that it contains an account of police torture. . . .  But that feels false because Wright’s story would have been just as relevant if it had been released 10 years ago or 30, 50, or 80—when he composed it. . . . Maybe, then, it’s more accurate to think of The Man Who Lived Underground as timeless rather than timely.” — New Republic

"This is a significant work of literary fiction from a legendary author that’s absolutely not to be missed." — Book Riot

"Nothing less than the reestablishing of a major legacy."  — The Chicago Tribune

“The Man Who Lived Underground is a masterpiece." — Time Magazine