All-American Dogs: A History of Presidential Pets from Every Era (Hardcover) 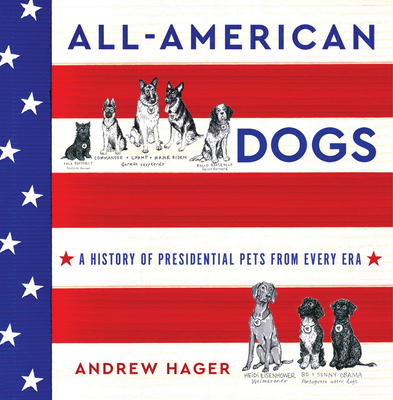 From historian-in-residence at the Presidential Pet Museum, Andrew Hager, comes a fond, fascinating, and often surprising look at the dogs who were the best friends of the presidents, featuring unforgettable photographs.

President Biden’s German shepherds, Major and the late Champ, are the latest in a long line of presidential dogs. Dating all the way back to George Washington, dogs have been constant companions to nearly all of America’s presidents. Of the past 46 presidents, 31 have had at least one dog at 1600 Pennsylvania Ave.

Organized by historical eras, All-American Dogs will take readers through the captivating history of the White House’s four-legged friends, the impact they had on their owner-in-chiefs, and, ultimately, American history. From the assassination of President’s Lincoln’s dog after Lincoln’s own death to President’s Hoover’s Belgian shepherd, King Tut, who helped President Hoover win the election after appearing in a campaign photo, these furry members of the first family often had a lasting impact on the administrations that kept them.

As historian-in-residence at the Presidential Pet Museum, Andrew Hager will include original research and rare photographs from the National Archives to trace the history of America’s first dogs. From post-Revolutionary dogs, to Civil War era dogs, to Cold War dogs, Hager will show the differences and similarities of how our nation viewed man’s best friend.

Readers will learn not only past presidents’ dogs in each historical era, but also the cultural history of dogs as pets, and the ways in which Americans’ relationships with dogs has evolved over the past two centuries.

ANDREW HAGER serves as historian-in-residence for the Presidential Pet Museum, a position he has held since 2017. Prior to that, he taught middle school social studies and language arts for a decade. Andrew is legally blind and travels with a black Labrador retriever named Sammy. He lives with his wife, Kristy, and their two children, Mia and Ian, in the suburbs outside of Baltimore, Maryland. In addition to Sammy, the family has a fluffy mixed-breed rescue named Emmy and two cats, Sophia and Olivia.