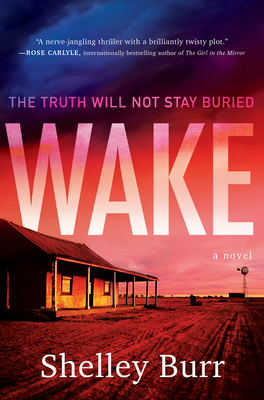 For fans of Jane Harper’s The Dry or Gillian Flynn’s Sharp Objects, a searing debut crime novel set in the Australian outback, where the grief and guilt surrounding an unsolved disappearance still haunt a small farming community…and will ultimately lead to a reckoning.

The tiny outback town of Nannine lies in the harsh red interior of Australia. Once a thriving center of stockyards and sheep stations, years of punishing drought have petrified the land and Nannine has been whittled down to no more than a stoplight, a couple bars, and a police station. And it has another, more sinister claim to fame: the still-unsolved disappearance of young Evelyn McCreery nineteen years ago.

Mina McCreery’s life has been defined by the intense public interest in her sister’s case—which is still a hot topic in true-crime chat rooms and on social media. Now an anxious and reclusive adult, Mina lives alone on her family’s sunbaked destocked sheep farm.

Enter Lane Holland, a young private investigator who dropped out of the police academy to earn a living cracking cold cases. Before she died, Mina’s mother funded a million-dollar reward for anyone who could explain how Evelyn vanished from her bed in the family’s farmhouse. The lure of cash has only increased public obsession with Evelyn and Mina—but yielded no answers.

Lane wins Mina’s trust when some of his more unconventional methods show promise. But Lane also has darker motivations, and his obsession with the search will ultimately risk both their lives—and yield shocking results.

Compulsively readable, with an unforgettable setting and cast of characters, WAKE is a powerful, unsparing story of how trauma ripples outward when people’s private tragedies become public property, and how it’s never too late for the truth to come out.

Shelley Burr works at the Department of Agriculture, Water and the Environment in Canberra, Australia. She grew up splitting her time between Newcastle and Glenrowan, where her father’s family are all sheep farmers. WAKE is her first novel.

“Genuinely gripping…Burr takes a solid framework and builds a darn fine, frequently impressive house around it out of secrets, human evil, and abiding grief and guilt.” — Criminal Element

“[An] outstanding debut…With a slow build and complex characters, this is both a well-plotted gripping mystery and a sensitive exploration of the aftermath of trauma.” — The Guardian (UK)

"A nerve-jangling thriller with a brilliantly twisty plot." — Rose Carlyle, bestselling author of The Girl in the Mirror

"If you love Jane Harper's books, you will love WAKE even more." — Kayte Nunn, bestselling author of The Silk House and The Last Reunion

"WAKE is an incredible read." — Allie Reynolds, author of Shiver