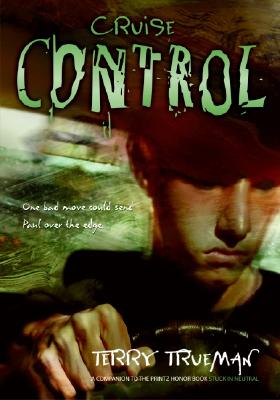 This is book number 2 in the Stuck in Neutral series.

How sick is this: I'm the major jock-stud in high school, but my brother has the brain of a badminton birdie and a body to match. I've got everything and he's got nothing. I'm a three-year, three-sport letterman and Shawn can't even stand up! Like I said, sick, huh?

Fueled by rage at what has happened to his family, Paul is ready to explode. And he is haunted by something even worse—something he can never tell anyone. It is something he will have to face if he is to have any hope of a future at all. While Cruise Control is a companion to Terry Trueman's Printz Honor book, Stuck in Neutral, it is the completely independent story of a family's "other" son—the one who is healthy, gifted, normal. It is a courageously hopeful story told with power, compassion, and humor.

Terry is also the author of Stuck in Neutral and its companion novel, Cruise Control; Hurricane; 7 Days at the Hot Corner; No Right Turn; and Inside Out.