Haroun and the Sea of Stories (Penguin Drop Caps) (Hardcover) 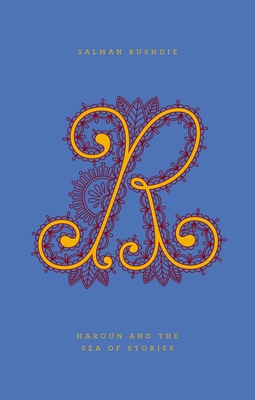 It all begins with a letter. Fall in love with Penguin Drop Caps, a new series of twenty-six collectible and hardcover editions, each with a type cover showcasing a gorgeously illustrated letter of the alphabet. In a design collaboration between Jessica Hische and Penguin Art Director Paul Buckley, the series features unique cover art by Hische, a superstar in the world of type design and illustration, whose work has appeared everywhere from Tiffany & Co. to Wes Anderson's recent film Moonrise Kingdom to Penguin's own bestsellers Committed and Rules of Civility. With exclusive designs that have never before appeared on Hische's hugely popular Daily Drop Cap blog, the Penguin Drop Caps series debuted with an 'A' for Jane Austen's Pride and Prejudice, a 'B' for Charlotte Brönte's Jane Eyre, and a 'C' for Willa Cather's My Ántonia. It continues with more perennial classics, perfect to give as elegant gifts or to showcase on your own shelves.

R is for Rushdie. Set in an exotic Eastern landscape peopled by magicians and fantastic talking animals, Salman Rushdie’s classic children’s novel Haroun and the Sea of Stories inhabits the same imaginative space as Gulliver’s Travels, Alice in Wonderland, and The Wizard of Oz. Haroun, a 12-year-old boy sets out on an adventure to restore the poisoned source of the sea of stories. On the way, he encounters many foes, all intent on draining the sea of all its storytelling powers.

Salman Rushdie is the author of eleven novels—Grimus, Midnight’s Children (for which he won the Booker Prize and the Best of the Booker), Shame, The Satanic Verses, Haroun and the Sea of Stories, The Moor’s Last Sigh, The Ground Beneath Her Feet, Fury, Shalimar the Clown, The Enchantress of Florence, and Luka and the Fire of Life—and one collection of short stories: East, West. He has also published three works of nonfiction: The Jaguar Smile, Imaginary Homelands: Essays and Criticism 1981–1991, and Step Across This Line, coedited two anthologies, Mirrorwork and Best American Short Stories 2008, and published Joseph Anton: A Memoir. His numerous literary prizes include the Booker Prize for Midnight's Children and the Whitbread Prize for The Satanic Verses.

Jessica Hische is a letterer, illustrator, typographer, and web designer. She currently serves on the Type Directors Club board of directors, has been named a Forbes Magazine "30 under 30" in art and design as well as an ADC Young Gun and one of Print Magazine’s "New Visual Artists". She has designed for Wes Anderson, McSweeney's, Tiffany & Co, Penguin Books and many others. She resides primarily in San Francisco, occasionally in Brooklyn.

Praise for Haroun and the Sea of Stories:

"This is, simply put, a book for anyone who loves a good story. It's also a work of literary genius."—Stephen King

"I enjoyed this adventure story.…It involves you at once and keeps you reading, and so it should, for it’s from the same magic land as Sinbad, The Thousand and One Nights, The Golden Fleece."—Doris Lessing

"A lively, wonderfully inventive comic tale . . . [Rushdie's] own Sea of Stories from which he drew this entertaining and moving book continues to flow as clear and brilliant as ever."
—Alison Lurie, The New York Times Book Review