The Shadow of the Wind (Penguin Drop Caps) (Hardcover) 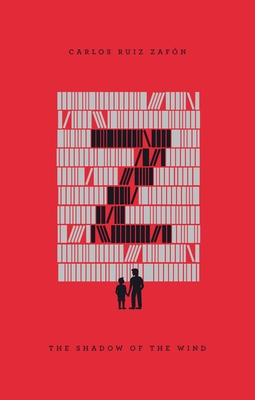 It all begins with a letter. Fall in love with Penguin Drop Caps, a new series of twenty-six collectible and hardcover editions, each with a type cover showcasing a gorgeously illustrated letter of the alphabet. In a design collaboration between Jessica Hische and Penguin Art Director Paul Buckley, the series features unique cover art by Hische, a superstar in the world of type design and illustration, whose work has appeared everywhere from Tiffany & Co. to Wes Anderson's recent film Moonrise Kingdom to Penguin's own bestsellers Committed and Rules of Civility. With exclusive designs that have never before appeared on Hische's hugely popular Daily Drop Cap blog, the Penguin Drop Caps series debuted with an 'A' for Jane Austen's Pride and Prejudice, a 'B' for Charlotte Brönte's Jane Eyre, and a 'C' for Willa Cather's My Ántonia. It continues with more perennial classics, perfect to give as elegant gifts or to showcase on your own shelves.

Z is for Zafón. Barcelona, 1945: A city slowly heals in the aftermath of the Spanish Civil War. Daniel, an antiquarian book dealer’s son who mourns the loss of his mother, finds solace in what he finds in the “cemetery of lost books,” a mysterious book entitled The Shadow of the Wind, by one Julián Carax. But when he sets out to find the author’s other works, he makes a shocking discovery: someone has been systematically destroying every copy of every book Carax has written. In fact, Daniel may have the last of Carax’s books in existence. Soon Daniel’s seemingly innocent quest opens a door into one of Barcelona’s darkest secrets--an epic story of murder, madness, and doomed love.

Carlos Ruiz Zafón is the author of six novels. His work has been translated into more than forty languages and published around the world, garnering numerous international prizes and reaching millions of readers. He divides his time between Barcelona, Spain and Los Angeles, California. He is the author of The Shadow of the Wind, The Angel's Game, The Prince of Mist, The Midnight Palace, The Prisoner of Heaven and The Watcher in the Shadows.

Lucia Graves is the author and translator of many works and has overseen Spanish-language editions of the poetry of her father, Robert Graves.
Jessica Hische is a letterer, illustrator, typographer, and web designer. She currently serves on the Type Directors Club board of directors, has been named a Forbes Magazine "30 under 30" in art and design as well as an ADC Young Gun and one of Print Magazine’s "New Visual Artists". She has designed for Wes Anderson, McSweeney's, Tiffany & Co, Penguin Books and many others. She resides primarily in San Francisco, occasionally in Brooklyn.

"Wonderous... masterful... The Shadow of the Wind is ultimately a love letter to literature, intended for readers as passionate about storytelling as its young hero."
—Entertainment Weekly (Editor's Choice)