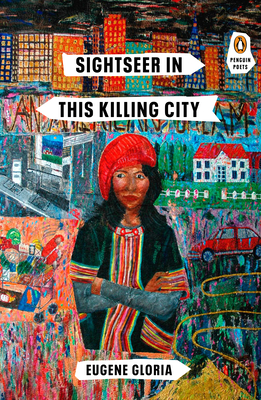 Eugene Gloria's Sightseer in This Killing City captures the surreal and disorienting feelings of the present. In the wake of recent presidential elections in the United States and in the Philippines, Gloria's latest collection sharpens his obsession with arrivals and departures, gun violence, displacement, cultural legacy, and the bitter divisions in America. Through the voice of Nacirema, the central persona of the collection, we are introduced to a character who chooses mystery and inhabits landscapes fraught with beauty and brutality. Gloria quotes melodies from seventies soul and jazz, blending the urban lament of Thelonious Monk and John Coltrane with the idiom of Stevie Wonder and Fela Kuti. Sightseer in this Killing City is an argument for grace and perseverance in an era of bombast and bullies.

Eugene Gloria's previous poetry collections are My Favorite Warlord, winner of the Anisfield-Wolf Book Award, Hoodlum Birds, and Drivers at the Short-Time Motel (2000), a National Poetry Series selection and recipient of the Asian American Literary Award. He lives in Greencastle, Indiana, and teaches at DePauw University.

Advance praise for Sightseer in This Killing City:

"Sightseer in This Killing City continues [Gloria’s] themes of family, silence, and wonder, but his poetry has evolved into an even more deft lineation: original phrasings, unique imagery, and lasting emotions. Gloria is full of surprises . . . We get the sense that [he] can write about anything, and can do it well—a rare gift." —The Millions

“Considered, beautiful and nimble. . . In [Sightseer in This Killing City], there is an exquisite, erudite, yet plain-spoken care with language from a poet well-read across continents and centuries . . . It is a continuing pleasure to dwell in the worlds, and work, that [Gloria] has wrought.” —Anisfield-Wolf.org

"In the tradition of Whitman and the Beats, Gloria’s 'discourse of bleeding utterances' memorably charts cities, countries, and his own family." —Publishers Weekly

“Empires crumble and the dust continues to contaminate the land, the air, our bodies, and our conscience. What a blessing to have Eugene Gloria help us reckon with the troubled histories that shape America, the Philippines, and every point in between. If the broken world had a musical score, it would thunder like the disquieting poems in Sightseer in This Killing City.” —Rigoberto González

“These fast-paced narratives are cacophonous and unsettling. But first and foremost, they are tales that praise ordinary people. Their stories sing out to the reader with heart-rending vividness. This book is a rough and sleepless journey told by a tourist who keeps arriving at a Goon Republic but never stays. A fascinating read.” —Marilyn Chin

“A lively, fast-paced third book . . . Gloria establishes himself as a poet of memory, of masculinity, as well as of Asian-American political identity . . . [and sets] himself confidently against injustice, in favor of inquiry, amid the eclectic language of contemporary scenes.” —Publishers Weekly

“Gloria's collection, a meditation on his late father and a lyric memoir of 1967, when he was ten years old and emigrated with his family from the Philippines to San Francisco, touches on issues of heritage, identity and memory.” —The Cleveland Plain Dealer