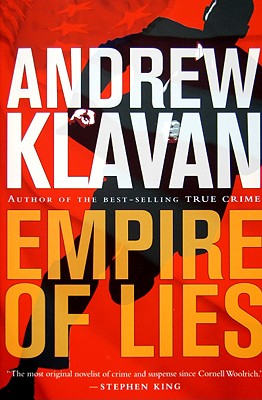 Sustained by a deep religious faith, Jason Harrow has built a stable family and become a pillar of principle and patriotism in the Midwest. Then the phone rings, and his past is on the other end of the line. A woman with whom he once shared a life of violence and desire claims her daughter is missing—and Jason is the one man who can find her. Returning to New York City, Jason finds himself entangled in a murderous conspiracy only he can see and only he can stop—a plot that bizarrely links his private passions to the turmoil of a world at war. Hunted by terrorists and by the police, Jason has only hours to unravel an ex-lover’s lies and face the unbearable truth: In order to prevent a savage attack on his country, he’s going to have to risk his decency, his sanity, and his life.

ANDREW KLAVAN is the author of the best-selling novels True Crime, filmed by Clint Eastwood, and Don’t Say a Word, a film starring Michael Douglas. His work has been nominated for the Edgar Award five times and has won twice. He is a contributing editor at City Journal and his articles have appeared, among other places, in the Wall Street Journal, the New York Times, and the Los Angeles Times. He lives in Southern California with his wife Ellen. They have a daughter, Faith, and a son, Spencer.

"Klavan’s writing is masterful, and his characters superbly drawn."—Forbes —