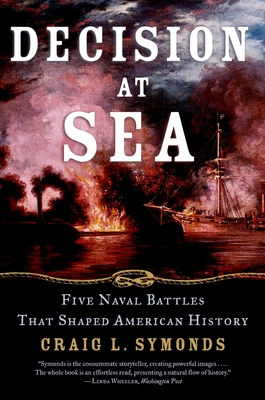 On Our Shelves Now - Click for Details
(This book cannot be returned.)

From thunderous broadsides traded between wooden sailing ships on Lake Erie, to the carrier battles of World War II, to the devastating high-tech action in the Persian Gulf, here is a gripping history of five key battles that defined the evolution of naval warfare--and the course of the
American nation. Acclaimed military historian Craig Symonds offers spellbinding narratives of crucial engagements, showing how each battle reveals the transformation of technology and weaponry from one war to the next; how these in turn transformed naval combat; and how each event marked a milestone in American
history. - Oliver Hazard Perry's heroic victory at Lake Erie, one of the last great battles of the Age of Sail, which secured the Northwestern frontier for the United States - The brutal Civil War duel between the ironclads Monitor and Virginia, which sounded the death knell for wooden-hulled warships and doomed the Confederacy's hope of besting the Union navy - Commodore Dewey's stunning triumph at Manila Bay in 1898, where the U.S. displayed its new navy of steel-hulled ships firing explosive shells and wrested an empire from a fading European power - The hairsbreadth American victory at Midway, where aircraft carriers launched planes against enemies 200 miles away--and where the tide of World War II turned in the space of a few furious minutes - Operation Praying Mantis in the Persian Gulf, where computers, ship-fired missiles, and smart bombs not only changed the nature of warfare at sea, but also marked a new era, and a new responsibility, for the United States. Symonds records these encounters in detail so vivid that readers can hear the wind in the rigging and feel the pounding of the guns. Yet he places every battle in a wide perspective, revealing their significance to America's development as it grew from a new Republic on the edge of a threatening
frontier to a global superpower. Decision at Sea is a powerful and illuminating look at pivotal moments in the history of the Navy and of the United States. It is also a compelling study of the unchanging demands of leadership at sea, where commanders must make rapid decisions in the heat of battle with lives--and the fate of
nations--hanging in the balance.

Craig L. Symonds is a leading Civil War and naval historian who was Professor of History at the United States Naval Academy for three decades. He also taught at the U.S. Naval War College and the Britannia Royal Naval College in Dartmouth, England. His ten books include award-winning biographies ofJoseph Johnston, Patrick Cleburne, and Franklin Buchanan, and the reference titles The Naval Institute Historical Atlas of the U.S. Navy and A Battlefield Atlas of the Civil War.