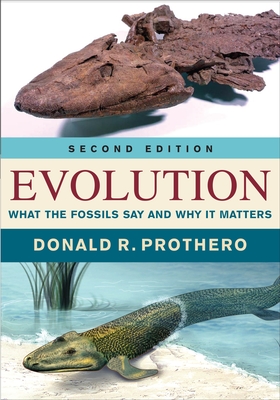 Donald R. Prothero's Evolution is an entertaining and rigorous history of the transitional forms and series found in the fossil record. Its engaging narrative of scientific discovery and well-grounded analysis has led to the book's widespread adoption in courses that teach the nature and value of fossil evidence for evolution. Evolution tackles systematics and cladistics, rock dating, neo-Darwinism, and macroevolution. It includes extensive coverage of the primordial soup, invertebrate transitions, the development of the backbone, the reign of the dinosaurs, and the transformation from early hominid to modern human. The book also details the many alleged "missing links" in the fossil record, including some of the most recent discoveries that flesh out the fossil timeline and the evolutionary process. In this second edition, Prothero describes new transitional fossils from various periods, vividly depicting such bizarre creatures as the Odontochelys, or the "turtle on the half shell"; fossil snakes with legs; and the "Frogamander," a new example of amphibian transition. Prothero's discussion of intelligent design arguments includes more historical examples and careful examination of the "experiments" and observations that are exploited by creationists seeking to undermine sound science education. With new perspectives, Prothero reframes creationism as a case study in denialism and pseudoscience rather than a field with its own intellectual dynamism. The first edition was hailed as an exemplary exploration of the fossil evidence for evolution, and this second edition will be welcome in the libraries of scholars, teachers, and general readers who stand up for sound science in this post-truth era.

Donald R. Prothero is a Research Associate in Vertebrate Paleontology at the Natural History Museum of Los Angeles County. He has taught college geology and paleontology for 40 years at institutions such as Columbia University, Vassar College, Knox College, and Pierce College, and currently at Cal Poly Pomona. For 27 years, he was Professor of Geology at Occidental College in Los Angeles and Lecturer in Geobiology at the California Institute of Technology in Pasadena. He earned his M.A., M.Phil., and Ph.D. degrees in geological sciences from Columbia University. He is the author of over 300 scientific papers published in leading journals and over 30 titles in geology, paleontology and evolutionary biology.