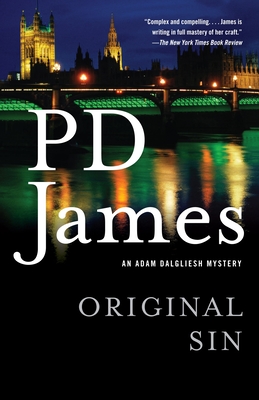 Adam Dalgliesh takes on a baffling murder in the rarefied world of London book publishing in this masterful mystery from one of our finest novelists. • Part of the bestselling mystery series that inspired Dalgliesh on Acorn TV

Commander Adam Dalgliesh and his team are confronted with a puzzle of impenetrable complexity. A murder has taken place in the offices of the Peverell Press, a venerable London publishing house located in a dramatic mock-Venetian palace on the Thames. The victim is Gerard Etienne, the brilliant but ruthless new managing director, who had vowed to restore the firm's fortunes. Etienne was clearly a man with enemies—a discarded mistress, a rejected and humiliated author, and rebellious colleagues, one of who apparently killed herself a short time earlier. Yet Etienne's death, which occurred under bizarre circumstances, is for Dalgliesh only the beginning of the mystery, as he desperately pursues the search for a killer prepared to strike and strike again.

P. D. James was the author of twenty books, many of which feature her detective hero Adam Dalgliesh and have been televised or filmed. She was the recipient of many honors, including the Mystery Writers of America Grand Master Award and the National Arts Club Medal of Honor for Literature, and in 1991 was created Baroness James of Holland Park. She died in 2014.

“Complex and compelling.... James is writing in full mastery of her craft.”—The New York Times Book Review“One of James's best novels.... James transcends literary classification.” —Chicago Sun-Times"The queen of the British murder mystery demonstrates why the crown is hers."—Newsday"One of James's most savory fictions. . . . A marvelous tale."—San Francisco Chronicle “One of her most enjoyable and vigorous novels.”—The Plain Dealer