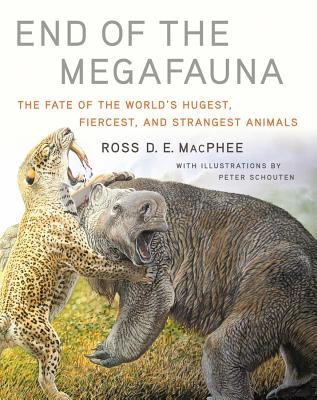 The fascinating lives and puzzling demise of some of the largest animals on earth.

Until a few thousand years ago, creatures that could have been from a sci-fi thriller—including gorilla-sized lemurs, 500-pound birds, and crocodiles that weighed a ton or more—roamed the earth. These great beasts, or “megafauna,” lived on every habitable continent and on many islands. With a handful of exceptions, all are now gone.

What caused the disappearance of these prehistoric behemoths? No one event can be pinpointed as a specific cause, but several factors may have played a role. Paleomammalogist Ross D. E. MacPhee explores them all, examining the leading extinction theories, weighing the evidence, and presenting his own conclusions. He shows how theories of human overhunting and catastrophic climate change fail to account for critical features of these extinctions, and how new thinking is needed to elucidate these mysterious losses.

Along the way, we learn how time is determined in earth history; how DNA is used to explain the genomics and phylogenetic history of megafauna—and how synthetic biology and genetic engineering may be able to reintroduce these giants of the past. Until then, gorgeous four-color illustrations by Peter Schouten re-create these megabeasts here in vivid detail.

Ross D. E. MacPhee is a paleomammalogist with the American Museum of Natural History in New York City, where he has worked since 1988. He has conducted more than fifty expeditions in many parts of the world, including both polar regions. In addition to numerous scientific papers, he is the author of Race to the End: Amundsen, Scott, and the Attainment of the South Pole (2010) and the editor of Extinctions in Near Time: Causes, Contexts, and Consequences (1999).

Peter Schouten is a self-taught and trained artist who works primarily in the field of natural history illustration. He has illustrated many award-winning books and his artworks have been collected by museums and galleries around the globe. In 2015 he was awarded the title Member of the Order of Australia, in recognition of his contributions to the development of Australian arts and sciences.

A first-class example of a fantastic popular science book. The combination of a logical structure, accessible writing, shrewd observations, and beautiful illustrations make it a pleasure to read and impossible to put down.
— Leon Vlieger - National History Book Service

An informative, up-to-date overview of a fascinating period in Earth's history.
— Science News

Fascinating....The author provides a contemporary and detailed analysis....these now-extinct megabeasts...are beautifully depicted in their preferred habitats in many incredible illustrations by artist Peter Schouten that are a joy to behold.
— Forbes

MacPhee explores the current [extinction] hypotheses, weighing up the evidence with academic rigour and delivering it with pop-science clarity. Like all good detective stories there is murder, plenty of intrigue and a cast of memorable characters, brought to life by palaeoartist Peter Schouten. These illustrations, married with MacPhee's easy-to-digest text, make turning each page like discovering a new gallery in an otherwise unimagined museum of fossil delights.
— Jules Howard - BBC Wildlife

What was once extinct is brought vividly to life here....This is a fascinating examination of a long-forgotten past and proof that giant life didn’t end with the dinosaurs. A great gift for those who like their history with bite.
— How It Works

I've always wanted to meet a glyptodon, or maybe a toxodon, or even a Giant Irish Deer. Why settle for fauna when you can have megafauna made easy? Ross D. E. MacPhee is a fabulous writer. His End of the Megafauna is a spectacularly illustrated and captivating whodunit exploring the greatest of extinction mysteries. A mixture of oddball observations, anecdotes, and true science, with all of those questions you've always wanted to ask an expert—'Why do species decline?' 'Why do extinctions occur?' 'Is it all our fault?' 'Can we expect no better for ourselves?' Why risk time travel to the Pleistocene when you can read this book? I highly recommend it.

— Errol Morris, author of The Ashtray

A lively and smart tour of the various theories of why so many large-bodied animals disappeared around 11,700 years ago. Drawing from his decades of personal involvement in the debate, Ross D. E. MacPhee explores the assumptions, arguments, and misconceptions about the roles of humans, a changing climate, and other possible causes for the disappearance of the megafauna. With vivid prose matched by Peter Schouten’s equally vivid illustrations, the reader is transported back in time to a world that is both foreign and familiar, and emerges with a better understanding of how our actions as humans impact the world around us.
— Beth Shapiro, author of How to Clone a Mammoth

This is a must-read for anyone interested in the subject of animal extinctions, in the present or the past.
— Publishers Weekly