The Paladin: A Spy Novel (Paperback) 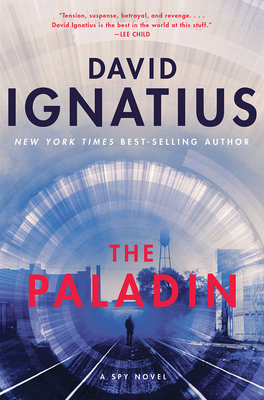 “Tension, suspense, betrayal, and revenge.… David Ignatius is the best in the world at this stuff.” —Lee Child

In this latest novel from the “dean of international intrigue” (Brad Thor) and New York Times best-selling author David Ignatius, CIA operations officer Michael Dunne is tasked with infiltrating an Italian news organization that smells like a front for an enemy intelligence service. Headed by an American journalist, the self-styled bandits run a cyber operation unlike anything the CIA has seen before. Fast, slick, and indiscriminate, the group steals secrets from everywhere and anyone, and exploits them in ways the CIA can neither understand nor stop.

Dunne knows it’s illegal to run a covert op on an American citizen or journalist, but he has never refused an assignment and his boss has assured his protection. Soon after Dunne infiltrates the organization, however, his cover disintegrates. When news of the operation breaks and someone leaks that Dunne had an extramarital affair while on the job, the CIA leaves him to take the fall. Now a year later, fresh out of jail, Dunne sets out to hunt down and take vengeance on the people who destroyed his life.

David Ignatius is a prize-winning columnist for the Washington Post and has been covering the Middle East and the CIA for four decades. He has written several New York Times bestsellers, most recently The Director. He lives in Washington, DC.

A page turner… [and] a chilling story of the way the Internet has been weaponized.
— Chris Bohjalian - Washington Post

No spy novelist knows the world of American spookery better than Ignatius.… His latest complex, well-informed work is one of his best.
— Adam LeBor - Financial Times

[A] fast moving, jaw dropping drama that reads like it was ripped from the headlines. I recommend you grab a copy and hold on tight for the entire thrilling ride.
— Brian Kilmeade, cohost of Fox News Channel’s Fox and Friends

David Ignatius once again takes readers behind the scenes of America’s most secretive bureaucracy, revealing in fiction what could never be declassified in fact. The Paladin is yet another stirring read from a revered reporter and gifted storyteller.

This is one of those rare novels that you will want to read twice—the first time for the enjoyment, and the second time to take note of how Ignatius does what he does so well.
— Joe Hartlaub - Bookreporter