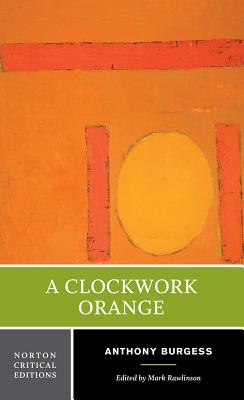 “A brilliant novel . . . a savage satire on the distortions of the single and collective minds.” —New York Times

“Anthony Burgess has written what looks like a nasty little shocker, but is really that rare thing in English letters: a philosophical novel.” —Time

A terrifying tale about good and evil and the meaning of human freedom, A Clockwork Orange became an instant classic when it was published in 1962 and has remained so ever since. Anthony Burgess takes us on a journey to a nightmarish future where sociopathic criminals rule the night. Brilliantly told in harsh invented slang by the novel’s main character and merciless droog, fifteen-year-old Alex, this influential novel is now available in a student edition.

The Norton Critical Edition of A Clockwork Orange is based on the first British edition and includes Burgess’s original final chapter. It is accompanied by Mark Rawlinson’s preface, explanatory annotations, and textual notes. A glossary of the Russian-origin terms that inspired Alex’s dialect is provided to illustrate the process by which Burgess arrived at the distinctive style of this novel.

“Backgrounds and Contexts” presents a wealth of materials chosen by the editor to enrich the reader’s understanding of this unforgettable work, many of them by Burgess himself. Burgess’s views on writing A Clockwork Orange, its philosophical issues, and the debates over the British edition versus the American edition and the novel versus the film adaptation are all included. Related writings that speak to some of the novel’s central issues—youthful style, behavior modification, and art versus morality—are provided by Paul Rock and Stanley Cohen, B. F. Skinner, John R. Platt, Joost A. M. Meerloo, William Sargent, and George Steiner.

“Criticism” is divided into two sections, one addressing the novel and the other Stanley Kubrick’s film version. Five major reviews of the novel are reprinted along with a wide range of scholarly commentary, including, among others, David Lodge on the American reader; Julie Carson on linguistic invention; Zinovy Zinik on Burgess and the Russian language; Geoffrey Sharpless on education, masculinity, and violence; Shirley Chew on circularity; Patrick Parrinder on dystopias; Robbie B. H. Goh on language and social control; and Steven M. Cahn on freedom. A thorough analysis of the film adaptation of A Clockwork Orange is provided in reviews by Vincent Canby, Pauline Kael, and Christopher Ricks; in Philip Strick and Penelope Houston’s interview with Stanley Kubrick; and in interpretive essays by Don Daniels, Alexander Walker, Philip French, Thomas Elsaesser, Tom Dewe Mathews, and Julian Petley.

A Selected Bibliography is also included.

Anthony Burgess (1917–1993) is the author of many works, including The Wanting Seed, Nothing Like the Sun, and Re Joyce. A Clockwork Orange is one of the "100 best novels" of both Time magazine and Modern Library and is on David Bowie's Book List.

Mark Rawlinson is Senior Lecturer at the University of Leicester. His books include British Writing of the Second World War, Pat Barker, The Second World War in British Fiction Since 1945, and Camouflage: Modern War and Visual Culture.