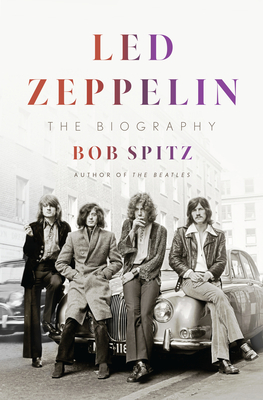 From the author of the definitive New York Times bestselling history of the Beatles comes the authoritative account of the group many call the greatest rock band of all time, arguably the most successful, and certainly one of the most notorious

Rock star. Whatever that term means to you, chances are it owes a debt to Led Zeppelin. No one before or since has lived the dream quite like Jimmy Page, Robert Plant, John Paul Jones, and John Bonham. In Led Zeppelin, Bob Spitz takes their full measure, separating the myth from the reality with his trademark connoisseurship and storytelling flair.

From the opening notes of their first album, the band announced itself as something different, a collision of grand artistic ambition and brute primal force, of English folk music and African American blues. That record sold over 10 million copies, and it was just the beginning; Led Zeppelin's albums have sold over 300 million certified copies worldwide, and the dust has never settled.

The band is notoriously guarded, and previous books provided more heat than light. But Spitz's authority is undeniable and irresistible. His feel for the atmosphere, the context--the music, the business, the recording studios, the touring life, the whole ecosystem of popular music--is unparalleled. His account of the melding of Page and Jones, the virtuosic London sophisticates, with Plant and Bonham, the wild men from the Midlands, in a scene dominated by the Beatles and the Stones but changing fast, is in itself a revelation. Spitz takes the music seriously and brings the band's artistic journey to full and vivid life.

The music, however, is only part of the legend: Led Zeppelin is also the story of how the sixties became the seventies, of how playing clubs became playing stadiums, of how innocence became decadence. Led Zeppelin wasn't the first rock band to let loose on the road, but as with everything else, they took it to an entirely new level. Not all the legends are true, but in Spitz's careful accounting, what is true is astonishing and sometimes disturbing.

Led Zeppelin gave no quarter, and neither has Bob Spitz. Led Zeppelin is the full and honest reckoning the band has long awaited, and richly deserves.

Bob Spitz is the award-winning author of the biographies The Beatles and Dearie: The Remarkable Life of Julia Child, both New York Times bestsellers, as well as six other nonfiction books and a screenplay. He helped manage Bruce Springsteen and Elton John at crucial points in their careers. He's written hundreds of major profiles of figures, ranging from Keith Richards to Jane Fonda, from Paul McCartney to Paul Bowles.

“In this authoritative, unsparing history of the biggest rock group of the 1970s, Spitz delivers inside details and analysis with his well-known gift for storytelling.” —People

“★★★½ out of four . . . The good, the bad and the ugly coexist in the Led Zeppelin story, and Spitz knows well enough to report and tell it all.” —USA Today

“Spitz’s deep research shows in spades: He’s either interviewed or culled past interviews with the principals as well as many of the lesser-visited people around them—childhood friends, former bandmates, various people from the business—to present a view of the band that, while familiar, provides enough new detail to capture even the most educated Zep fan’s imagination.” —Variety, Best Music Books of 2021

“Spitz, who has written well-regarded biographies of the Beatles and Julia Child, delivers a 600-page tome that collects every (reliable) story previously reported, and is bolstered by original reporting and interviews—all delivered in brisk and straightforward prose . . . The book is peppered with musical references that Spitz describes as evocatively as mere writing can describe music.” —Washington Post

“Explaining how songs were written, arrangements developed onstage and in the studio, and performances built into towering displays of showmanship and power, Spitz writes intriguingly about how the band made magic through moves both purposeful and coincidental. The details of how classic tunes like ‘Kashmir’ and ‘Stairway to Heaven’ came together, as well as Spitz's analysis of what makes them so exciting, dynamic and singular, prove especially engaging. . . . Spitz has assembled a thorough and detailed history of Zeppelin, and his interviews with the band's employees and contemporaries give the tale veracity.” —Pittsburgh Post-Gazette

“The book is a towering achievement of research and storytelling that eschews rock hagiography to tell the full story of the humans who comprised the legend. The eliciting of complicated feelings is a testament to Spitz’s work, not a mark against it.” —Chicago Tribune, Best 5 Memoirs and Biographies of 2021

“Big and definitive . . . . Led Zeppelin: The Biography by Beatles biographer Bob Spitz glides past the rowdy fun of past histories for something more authoritative . . . It finds room for both the hedonistic superstar cruelty and a well-researched appreciation.” —Chicago Tribune

“A doorstop biography befitting the premier rock band of the 1970s.” —Kirkus

“Music biographer Spitz (The Beatles) calls on his supreme research and analytical skills to deliver the definitive story of one of the greatest rock groups of the 1970s. While this isn’t the first (or second) telling of the Zeppelin saga, it reigns superior to its predecessors with an exhaustive history that never flags in momentum or spirit. He takes an unsparing look at how the band’s massive success snowballed into a ‘heedless hedonism’ that led to their decline and disbanding . . . For all the excess and cruelty Spitz recounts, his passion for the band’s musical genius will captivate rock enthusiasts.” —Publishers Weekly (starred)

“Wielding his signature tools of meticulous reporting, piercing analysis and trenchant writing, Bob Spitz proves again that he's a modern master of cultural biography. Led Zeppelin: The Biography cuts through the myth and murk to reveal the true story of the biggest, bawdiest rock 'n' roll band of the 1970s. Like the music they made, Led Zeppelin's story is equal parts inspiring, electrifying and shocking. Led by the most brutal manager in the business, the quartet blitzed the world like a marauding army, crushing critical resistance and sales records as easily as they seduced groupies and consumed mammoth quantities of booze and drugs. Spitz goes deeper and sees more clearly than any previous biographer, and his storytelling powers make it spellbinding.” —Peter Carlin, author of Bruce and Sonic Boom

“As he did with his book on the Beatles, Bob Spitz uses deep research and a wide lens to create the single most comprehensive book about a legendary band. So much of Zeppelin’s history is cemented in lore that hardcore fans may feel they know ‘all’ the history already, but Spitz’s great accomplishment is to make every corner of LZ’s history—from their 1968 debut to their Berlin swan song—feel fresh again. You simply don’t want this story to end, or this book.” —Charles R. Cross, author of Heavier Than Heaven: A Biography of Kurt Cobain and Room Full of Mirrors: A Biography of Jimi Hendrix

“Bob Spitz shows Led Zeppelin as the iconoclasts they were, grinding the self-consciousness of rock ’n roll in the 70s into submission without a backward glance. Infamous stories from the road, tales of excess, dominance, and ego are balanced by the band’s insatiable desire for heat and beauty. This is the story of poetry and power, rape and pillage, of rock ’n roll incarnate. A valuable recording of rock art history. So well done!” —Ann Wilson, Heart

“As he did with his magisterial The Beatles, Bob Spitz tells the story of Led Zeppelin with a poet’s heart, and with a knowledge of that sweep of musical and cultural history that is breathtaking. Every detail, from their formation via leader Jimmy Page’s Yardbirds to their last show, in Berlin, in 1980—the recordings, the live shows, the business, the debauchery, the way it all landed in the world—is explored with sophistication. And the book makes a serious contribution to the #MeToo canon. Panoramic, viscerally exciting, and sociologically majestic: books on popular culture simply don’t get any better than this.” —Sheila Weller, author of Girls Like Us: Carole King, Joni Mitchell, Carly Simon—And the Journey of a Generation

“Bob Spitz always gets right to the heart of the story, whether it’s the story of Dylan, the Beatles, or Julia Child. This story, the outrageous story of Led Zeppelin and all its rock ’n roll craziness, is right here in these pages.” —Graham Nash

“From LZ's guitar-god origins through its boozy, drug-addled decline, Bob Spitz doesn't miss a riff, solo or trashed hotel room. But like the band itself, what emerges most profoundly is the historic, stop-what-you're-doing sound—loud, bluesy, unapologetic. This is everything you could want in a rock biography.” —Jess Walter, author of Beautiful Ruins