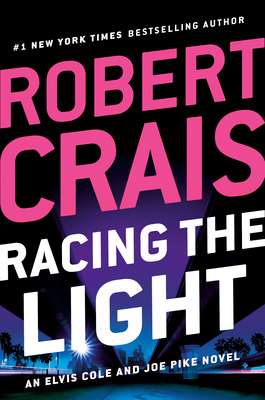 This is book number 19 in the An Elvis Cole and Joe Pike Novel series.

Private investigator Elvis Cole and his enigmatic partner, Joe Pike, are back on the case in this brilliant new thriller from #1 New York Times bestselling author Robert Crais.

Adele Schumacher isn't a typical worried mom. When she hires Elvis to find her missing son, a controversial podcaster named Josh Shoe, she brings a bag filled with cash, bizarre tales of government conspiracies, and a squad of professional bodyguards. Finding Josh should be simple, but Elvis quickly learns he isn't alone in the hunt—a deadly team of mysterious strangers are determined to find Josh and his adult film star girlfriend first.
With dangerous secrets lurking behind every lead, Elvis needs his friend Joe Pike more than ever to uncover the truth about Josh, corrupt politicians, and the vicious business cartels rotting the heart of Los Angeles from within. And when Elvis's estranged girlfriend, Lucy Chenier, and her son, Ben, return, he learns just how much he has to lose...if he survives.
Written with the heart, humor, and relentless suspense for which Crais is famous, Racing the Light delivers Elvis Cole's most dangerous case yet.

Robert Crais is the author of twenty-two previous novels, eighteen of them featuring private investigator Elvis Cole and his laconic ex-cop partner, Joe Pike. Before writing his first novel, Crais spent several years writing scripts for such major television series as Hill Street Blues, Cagney & Lacey, and Miami Vice. He was named a Grand Master by the Mystery Writers of America and has received multiple awards for his work. His novels have been translated into forty-two languages and are bestsellers around the world. A native of Louisiana, he lives in Los Angeles.

"A whirlwind of action, fisticuffs, and stray bullets, along with Crais’ usual dose of heart and humor, make for a riveting and satisfying read."
—Booklist (starred review)

"Racing The Light is another grand slam for the master storyteller Robert Crais. If there’s a better dynamic duo than Elvis Cole and Joe Pike in all of crime fiction, I’m not aware of it."
—David Baldacci, author of Long Shadows

"I devoured Robert Crais‘s Racing the Light, starring his iconic duo PI Elvis Cole and ex-cop Joe Pike. This time, Cole and Pike search for a missing son at the behest of the boy’s mother, and Racing the Light packs plenty of twists and turns to keep the pages turning. What makes Crais’s writing stand out is the deft humor, warmth, and heart on every page. Crais does the impossible in this thriller: moves the story at a breakneck pace while creating characters you absolutely adore."
—Lisa Scottoline, author of What Happened to the Bennetts

"Elvis and Joe return in Racing the Light, a novel as deeply human as it is compelling. If you want to understand why Robert Crais is considered a modern master of crime fiction, crack this book open now. His trademark humor and insight drive every page."
—Gregg Hurwitz, author of Dark Horse

"Crais' affection for his characters, masterful pacing, and dry wit make this one of his better efforts...[Crais] keeps the traditional detective novel alive and well."
—Kirkus Reviews

"Crais is a meticulous plotter. This story is dazzling."
—Dayton Daily News

"Everything builds toward a smash-up ending, which author Crais delivers."
—St. Louis Post-Dispatch

"Racing the Light crackles with Cole’s typically witty, and yet angst-riddled, dialogue. This is crime writing at its absolute level best, a smooth and scintillating seminal triumph of both form and function."
—BookTrib

"Crais hits the ground running with Racing the Light, employing all his trademark touches: an engrossing plot-heavy story accented with Elvis’ wry humor, solid action, characters whom readers have come to love and a high entertainment level."
—South Florida Sun-Sentinel