Short Nights Of The Shadow Catcher: The Epic Life and Immortal Photographs of Edward Curtis (Paperback) 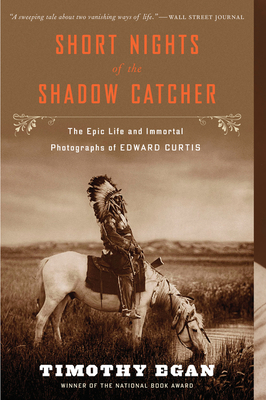 New York Times bestselling and Pulitzer Prize-winning author Timothy Egan reveals the life story of the man determined to preserve a people and culture in Short Nights of the Shadow Catcher: The Epic Life and Immortal Photographs of Edward Curtis.

“A vivid exploration of one man's lifelong obsession with an idea . . . Egan’s spirited biography might just bring [Curtis] the recognition that eluded him in life.” ​— ​The Washington Post

Edward Curtis was charismatic, handsome, a passionate mountaineer, and a famous portrait photographer, the Annie Leibovitz of his time. He moved in rarefied circles, a friend to presidents, vaudeville stars, leading thinkers. But when he was thirty-two years old, in 1900, he gave it all up to pursue his Great Idea: to capture on film the continent’s original inhabitants before the old ways disappeared.

Curtis spent the next three decades documenting the stories and rituals of more than eighty North American tribes. It took tremendous perseverance  ​— ​ ten years alone to persuade the Hopi to allow him to observe their Snake Dance ceremony. And the undertaking changed him profoundly, from detached observer to outraged advocate. Curtis would amass more than 40,000 photographs and 10,000 audio recordings, and he is credited with making the first narrative documentary film. In the process, the charming rogue with the grade school education created the most definitive archive of the American Indian.

TIMOTHY EGAN is a Pulitzer Prize–winning reporter and the author of eight other books, most recently The Immortal Irishman, a New York Times bestseller. His book on the Dust Bowl, The Worst Hard Time, won a National Book Award for nonfiction. His account of photographer Edward Curtis, Short Nights of the Shadow Catcher, won the Carnegie Medal for nonfiction. He writes a biweekly opinion column for the New York Times.

* A New York Times Notable Book *An Amazon Best Book * A Publishers Weekly Best Book * A Christian Science Monitor Best Book   "In this hauntingly beautiful book, Egan brings Curtis to life as vividly and with as much depth, heart and understanding as Curtis himself put into his timeless portraits. This is a story for the ages."  --Candice Millard, author of The River of Doubt and Destiny of the Republic   "An obsessive genius neglects his personal life and business matters to pursue a great white whale. It's a familiar tale and the essential narrative of Egan's terrific biography. . . . Egan fills his chronicle with bright turns of phrase and radiant descriptions . . . A sweeping tale about two vanishing ways of life." -- Wall Street Journal   "A stirring and affectionate portrait of an underknown figure." -- The New York Times Book Review   "Short Nights is not only the marvelous and rollicking account of life of one of America's extraordinary photographers. It is also a book about the extreme personal cost of outsized ambition. Egan has found yet another great subject, and has crafted yet another great narrative around it." -- S.C. Gwynne, author of Empire of the Summer Moon   "In this extraordinary biography, Tim Egan has revealed a great American adventurer who lived at the fragile, fertile intersection of history, anthropology, and art." --Hampton Sides, author of Blood and Thunder "A vivid exploration of one man's lifelong obsession with an idea . . .Egan's spirited biography might just bring [Curtis] the recognition that eluded him in life." -- Washington Post "Egan is a muscular storyteller and his book is a rollicking page-turner with a colorfully drawn hero." -- San Francisco Chronicle "A stunning portrait of Edward Curtis that captures every patina of his glory, brilliance, and pathos." -- Christian Science Monitor   "Egan brings liveliness and a wealth of detail to his biography of the legendary photographer . . . A riveting biography." - Boston Globe
"Insightful and entetaining . . . Egan's excellent book stands as a fitting tribute to an American original who fought for a people with his camera and his art." -- Los Angeles Times
"[A] captivating tribute to a treasured American and the treasures he created."-- Dallas Morning News —