Why Save The Bankers?: And Other Essays on Our Economic and Political Crisis (Paperback) 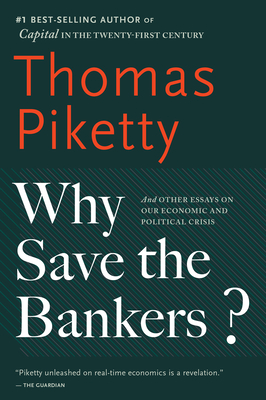 “Piketty unleashed on real-time economics is a revelation.” — Guardian

Thomas Piketty’s work has proved that unfettered markets lead to increasing inequality. Without meaningful regulation, capitalist economies will concentrate wealth in an ever smaller number of hands. For years, this critical challenge to democracy has been the focus of Piketty’s monthly newspaper columns, which pierce the surface of current events to reveal the economic forces underneath. Why Save the Bankers? brings together selected columns from the period bookended by the September 2008 collapse of Lehman Brothers and the terrorist attacks in Paris in November 2015. In crystalline prose, Piketty examines a wide range of topics, and along the way he decodes the European Union’s economic troubles, weighs in on oligarchy in the United States, wonders whether debts actually need to be paid back, and discovers surprising lessons about inequality by examining the career of Steve Jobs. Coursing with insight and flashes of wit, these brief essays offer a view of recent history through the eyes of one of the most influential economic thinkers of our time.
?
“Anyone with an interest in politics, monetary policy, or international diplomacy will get a kick out of Piketty’s clear discussion.” — Shelf Awareness

“If you have been influenced by Piketty's landmark work on inequality, make sure to read this next.” — Naomi Klein, author of The Shock Doctrine and This Changes Everything

THOMAS PIKETTY is professor of economics at the Paris School of Economics and the École des hautes études en sciences sociale, and Centennial Professor at the London School of Economics's International Inequalities Institute. He is the author of numerous articles and a dozen books. He has done major historical and theoretical work on the interplay between economic development and the distribution of income and wealth. His most recent book is Capital in the Twenty-First Century. He lives in Paris, France.

“The questions explored in these brilliant essays cut to the heart of our failing economic and democratic systems. If you have been influenced by Piketty’s landmark work on inequality, make sure to read this next.” —Naomi Klein, author of The Shock Doctrine and This Changes Everything   “Easy to follow for readers without much knowledge of economics, especially when [Piketty] picks apart topics that defy classical economic logic; in this he resembles Paul Krugman, who similarly writes clearly on complex topics . . . Helps make sense of recent financial history.” —Kirkus Reviews   “Remember when everyone was obliged to pretend to have read Piketty’s 700-page tome Capital in the Twenty-First Century? Now [comes] a Piketty for the proletariat, compiling eight years of the economist’s columns written for the French magazine Libération. The book begins in September 2008 just after the collapse of Lehman Brothers and takes readers through the aftermath of the crisis that followed, offering Pikettian analysis of the Obama presidency and the European Union’s debt woes.” —The Millions, “The Great 2016 Nonfiction Book Preview” —