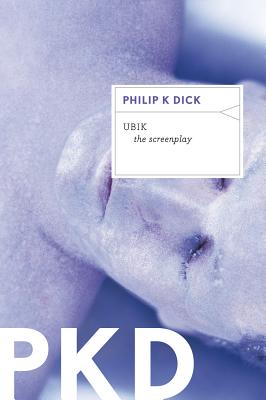 “An accident has occurred. Joe Chip and his colleagues—all but one of them—have narrowly escaped an explosion at a moon base. Or is it the other way round? Did Joe and the others die, and did the one fatality, Glen Runciter, actually survive? . . . From the stuff of space opera, Dick spins a deeply unsettling existential horror story, a nightmare you’ll never be sure you’ve woken up from.”—Lev Grossman, Time

In 1974, Philip K. Dick was commissioned to write a screenplay based on his novel Ubik. The film was eventually scrapped, but the screenplay was saved and later published in 1985. Featuring scenes that are not in the book and a surreal playfulness—the style of the writing goes back in time just like the technology in the book’s dreamworld—this screenplay is the only one Dick wrote and features his signature mix of paranoia, humor, and big-idea philosophy.

Over a writing career that spanned three decades, PHILIP K. DICK (1928–1982) published 36 science fiction novels and 121 short stories in which he explored the essence of what makes man human and the dangers of centralized power. Toward the end of his life, his work turned to deeply personal, metaphysical questions concerning the nature of God. Eleven novels and short stories have been adapted to film, notably Blade Runner (based on Do Androids Dream of Electric Sheep?), Total Recall, Minority Report, and A Scanner Darkly, as well as television's The Man in the High Castle. The recipient of critical acclaim and numerous awards throughout his career, including the Hugo and John W. Campbell awards, Dick was inducted into the Science Fiction Hall of Fame in 2005, and between 2007 and 2009, the Library of America published a selection of his novels in three volumes. His work has been translated into more than twenty-five languages.