The Caves of Steel (The Robot Series #2) (Mass Market) 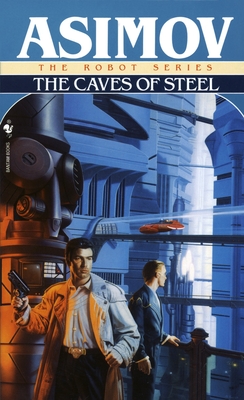 This is book number 2 in the The Robot Series series.

A millennium into the future two advancements have altered the course of human history: the colonization of the galaxy and the creation of the positronic brain. Isaac Asimov’s Robot novels chronicle the unlikely partnership between a New York City detective and a humanoid robot who must learn to work together.

Like most people left behind on an over-populated Earth, New York City police detective Elijah Baley had little love for either the arrogant Spacers or their robotic companions. But when a prominent Spacer is murdered under mysterious circumstances, Baley is ordered to the Outer Worlds to help track down the killer.

The relationship between Life and his Spacer superiors, who distrusted all Earthmen, was strained from the start. Then he learned that they had assigned him a partner: R. Daneel Olivaw.  Worst of all was that the “R” stood for robot—and his positronic partner was made in the image and likeness of the murder victim!

Isaac Asimov began his Foundation series at the age of twenty-one, not realizing that it would one day be considered a cornerstone of science fiction. During his legendary career, Asimov penned more than 470 books on subjects ranging from science to Shakespeare to history, though he was most loved for his award-winning science fiction sagas, which include the Robot, Empire, and Foundation series. Named a Grand Master of Science Fiction by the Science Fiction Writers of America, Asimov entertained and educated readers of all ages for close to five decades. He died, at the age of seventy-two, in April 1992.