We Are All Made of Molecules (Paperback) 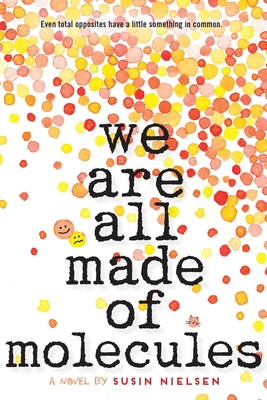 Stewart, 13: Socially clueless genius.
Ashley, 14: Popular with everyone but her teachers

Ashley's and Stewart's worlds collide when Stewart and his dad move in with Ashley and her mom. The Brady Bunch it isn't. Stewart is trying to be 89.9 percent happy about it--he's always wanted a sister. But Ashley is 110 percent horrified. She already has to hide the real reason her dad moved out; “Spewart” could further threaten her position at the top of the social ladder.

They're complete opposites, but they have one thing in common: they—like everyone else—are made of molecules.

In this hilarious and deeply moving story, award-winning author Susin Nielsen has created two narrators who will steal your heart and make you laugh out loud.


"A laugh-out-loud story of two teens learning to adjust to unusual family life that neither expected...Everyone from teenagers to adults will enjoy this story of ups and downs, laughter and tears, and the healing power of love."--VOYA

What Other Authors Are Saying
“Susin Nielsen is one of the best writers working today. In We Are All Made of Molecules, her astonishing ability to combine insight, tenderness, poignancy, and uproarious humor is in full flower. Susin Nielsen is a genius, and kids and adults alike will adore this book.” —Susan Juby, author of The Truth Commission

“What a skilled, gifted writer Susin is!…There’s so much to love about this story . . . but what grabbed me the most is the humor.”  —Christopher Paul Curtis, Newbery Medal–winning author of Bud, Not Buddy and The Watsons Go to Birmingham—1963

Susin Nielsen got her start feeding cast and crew on the popular television series Degrassi Junior High. They hated her food, but they saw a spark in her writing. Nielsen went on to pen sixteen episodes of the hit TV show. Since then, Nielsen has written for many Canadian TV series.