Watch Over Me (Paperback) 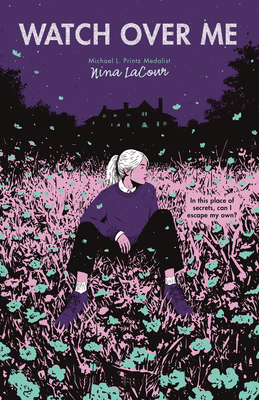 A modern ghost story about trauma and survival, Watch Over Me is the much-anticipated new novel from the Printz Award-winning author of We Are Okay

Mila is used to being alone.

Maybe that’s why she said yes. Yes to a second chance in this remote place, among the flowers and the fog and the crash of waves far below.

But she hadn’t known about the ghosts.

Newly graduated from high school, Mila has aged out of the foster care system. So when she’s offered a teaching job and a place to live on an isolated part of the Northern California coast, she immediately accepts. Maybe she will finally find a new home—a real home. The farm is a refuge, but it’s also haunted by the past. And Mila’s own memories are starting to rise to the surface.

Nina LaCour, the Printz Award–winning author of We Are Okay, delivers another emotional knockout with Watch Over Me about trauma and survival, chosen family and rebirth.

Nina LaCour is the author of the widely acclaimed Hold Still, The Disenchantments, Everything Leads to You, and the Michael L. Printz Award winner We Are Okay. She is also the coauthor, with David Levithan, of You Know Me Well. Formerly a bookseller and high school English teacher, she now writes and parents full-time. A San Francisco Bay Area native, Nina lives with her family in San Francisco, California. www.ninalacour.com

★ “The sense of place is strong, and readers will be transported to the rocky, coastal hills shrouded in fog and full of secrets.... Mila’s journey to reclaim herself and find independence is tense and powerful.” —Kirkus, starred review

★ “LaCour presents a ghost story that is moving, unsettling, and full of atmospheric beauty with foggy, coastal air that hangs heavy in the pages.... 100% LaCour at its core.” —SLJ, starred review

★ “LaCour’s portrait of a young woman yearning to belong and facing her past while navigating the liminal space between childhood and adulthood brims with tender moments and sensory details.” —Publishers Weekly, starred review

“LaCour’s writing is lyrical and atmospheric, both in capturing the natural setting of the story and in exploring the dark recesses of her characters’ grief, guilt, and psychic pain.... An empowering story of one young woman’s quest to rediscover the part of herself she has left behind and to become independent.” —Horn Book

We Are Okay
Winner of the Michael L. Printz Medal
A National Best Seller

“A meditation on surviving grief, We Are Okay is short, poetic and gorgeously written. The world LaCour creates is fragile but profoundly humane.” —The New York Times Book Review

“A beautiful, devastating piece of art. Be prepared to be gutted—and grateful. We Are Okay is an extraordinary work by an author who keeps redefining and elevating her genre.” —BookPage

“Nina LaCour treats her emotions so beautifully and with such empathy. Of course, we'd expect nothing less from the stunning LaCour.” —Bustle

★ ”A moving portrait of a girl struggling to rebound after everything she’s known has been thrown into disarray.” —Publishers Weekly, starred review

“Confident writing and [a] savvy sense of prose.”  —Kirkus

“The book is written with honesty, revealing one's pain after the loss of a loved one.” — SLJ

★ “This is about the inside and outside of characters, the past and future of their lives—and it is astonishing.” —Booklist, starred review

★ ”A rich tapestry that will make readers confident that they are in the hands of a master storyteller. Hauntingly beautiful.” —Kirkus, starred review

Everything Leads to You
★ “Underneath the privilege surges real pain, longing, and feeling.” —Publishers Weekly, starred review