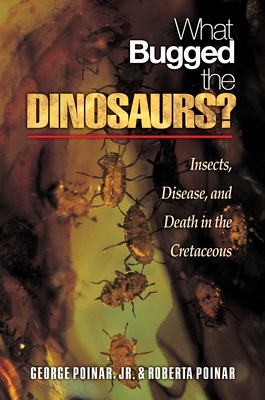 Millions of years ago in the Cretaceous period, the mighty Tyrannosaurus rex--with its dagger-like teeth for tearing its prey to ribbons--was undoubtedly the fiercest carnivore to roam the Earth. Yet as What Bugged the Dinosaurs? reveals, T. rex was not the only killer. George and Roberta Poinar show how insects--from biting sand flies to disease-causing parasites--dominated life on the planet and played a significant role in the life and death of the dinosaurs.

The Poinars bring the age of the dinosaurs marvelously to life. Analyzing exotic insects fossilized in Cretaceous amber at three major deposits in Lebanon, Burma, and Canada, they reconstruct the complex ecology of a hostile prehistoric world inhabited by voracious swarms of insects. The Poinars draw upon tantalizing new evidence from their amazing discoveries of disease-producing vertebrate pathogens in Cretaceous blood-sucking flies, as well as intestinal worms and protozoa found in fossilized dinosaur excrement, to provide a unique view of how insects infected with malaria, leishmania, and other pathogens, together with intestinal parasites, could have devastated dinosaur populations. A scientific adventure story from the authors whose research inspired Jurassic Park, What Bugged the Dinosaurs?? offers compelling evidence of how insects directly and indirectly contributed to the dinosaurs' demise.

George Poinar, Jr., is currently in the Zoology Department at Oregon State University. He is well known internationally in various fields, including paleobiology, nematology, and insect pathology. He became familiar with tropical diseases while serving as a consultant for the United Nations and World Health Organization. Roberta Poinar is a retired research scientist. They are the coauthors of The Amber Forest: A Reconstruction of a Vanished World (Princeton) and The Quest for Life in Amber. Their research has been featured in leading publications worldwide and on television programs such as Nova.