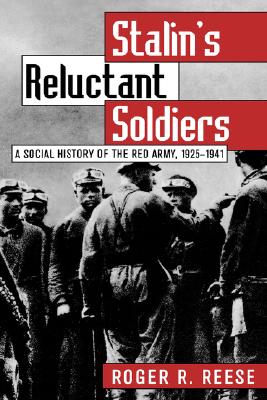 Under Joseph Stalin's iron-fisted rule, the Soviet state tried to forge an army that would be both a shining example of proletarian power and an indomitable deterrent against fascist aggression. In reality, Roger Reese reveals, Stalin's grand military experiment failed miserably on both counts before it was finally rescued within the crucible of war. Reese greatly expands our understanding of the Red Army's evolution during the 1930s and its near decimation at the beginning of World War II. Counter to conventional views, he argues that the Stalinist state largely failed in its attempt to use military service as a means to indoctrinate its citizens, especially the peasantry. After 1928, the regime's recruits became increasingly disenchanted with Stalin's socialist enterprise--primarily due to the disheartening changes brought on by collectivization and dekulakization. In effect, these reluctant soldiers turned their backs on both the army and Communist Party leadership, neither of which regained credibility until after World War II. The soldiers' alienation and hostility, Reese demonstrates, was most clearly manifested in the highly volatile tensions between officers and peasant recruits following the military's chaotic expansion during the 1930s. Those tensions and numerous internal conflicts greatly undermined the regime's effort to create a well-trained, cohesive, and politically indoctrinated army. In place of this ideal, the regime stumbled along with a disunited and ineffective fighting force guided by outdated doctrines and led by an undeveloped officer corps. All of those elements made the Soviet Union particularly vulnerable to the devastating military disasters of 1941. Along the way, Reese persuasively dispels a number of myths. He shows, for example, that the Red Army's humiliating defeats at the start of the war were not, as many still believe, due to Stalin's bloody purges of the officer corps during the 1930s nor to overwhelming German military and economic superiority. Stalin, Reese argues, was only one of many key influences on the Soviet's disorganized effort to field an effective fighting force. And, while the Red Army was actually technologically superior to the Wehrmacht, the Germans made far better strategic and tactical use of their forces to overwhelm the poorly led Soviets. A fascinating portrait of an army at war with itself, Reese's study illuminates the daily lives of soldiers, officers, and civilians and forever changes the way we look at the relation between political motives and military needs in the early Soviet state.