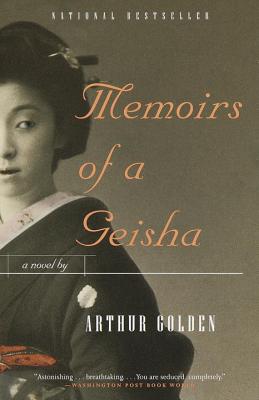 In this literary tour de force, novelist Arthur Golden enters a remote and shimmeringly exotic world. For the protagonist of this peerlessly observant first novel is Sayuri, one of Japan's most celebrated geisha, a woman who is both performer and courtesan, slave and goddess.
We follow Sayuri from her childhood in an impoverished fishing village, where in 1929, she is sold to a representative of a geisha house, who is drawn by the child's unusual blue-grey eyes. From there she is taken to Gion, the pleasure district of Kyoto. She is nine years old. In the years that follow, as she works to pay back the price of her purchase, Sayuri will be schooled in music and dance, learn to apply the geisha's elaborate makeup, wear elaborate kimono, and care for a coiffure so fragile that it requires a special pillow. She will also acquire a magnanimous tutor and a venomous rival. Surviving the intrigues of her trade and the upheavals of war, the resourceful Sayuri is a romantic heroine on the order of Jane Eyre and Scarlett O'Hara. And "Memoirs of a Geisha" is a triumphant work - suspenseful, and utterly persuasive.

Arthur Golden was born in Chattanooga, Tennessee, and was educated at Harvard College, where he received a degree in art history, specializing in Japanese art. In 1980 he earned an M.A. in Japanese history from Columbia University, where he also learned Mandarin Chinese. Following a summer at Beijing University, he worked in Tokyo and, after returning to the United States, earned an M.A. in English from Boston University. He resides in Brookline, Massachusetts, with his wife and two children. --