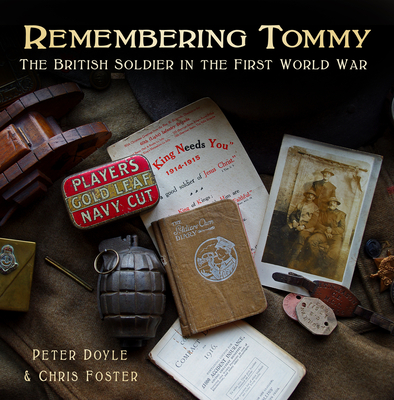 The British soldier of the Great War has been depicted in many books. Invariably, a pen picture paints him as stoic, joining the army in a wave of patriotic fervour, and destined to serve four years on the Western Front in some of the most costly battles in history. Yet often the picture is difficult to resolve for the reader. How did the soldier live, where did he sleep? What was it like to go over the top, and when he did, what did he carry with him? For many, the idea of trench life is hazy, and usually involves ‘drowning in mud’, in, as one writer put it, ‘the pitiless misery’ of Passchendaele.Remembering Tommy pays tribute to the real British soldier of the Great War. In stunning images of uniforms, equipment and ephemera, it conjures the atmosphere of the trenches through the belongings of the soldiers themselves – allowing us almost to reach out and touch history.

PETER DOYLE is a scientist and military historian specialising in the role of terrain in warfare. He is a visiting Professor at University College London, and is co-secretary of the All Party Parliamentary War Heritage Group. He has written: Beneath Flanders Fields: The Underground War 1914-18; Grasping Gallipoli and Battle Story Gallipoli 1915. He lives in London. www.peterdoylemilitaryhistory.com/CHRIS FOSTER is an artist and photographer operating in the Yorkshire Dales. He developed the website ‘Craven’s Part in the Great War’ (www.cpgw.org.uk) as a memorial to the men of Craven who served in the First World War.