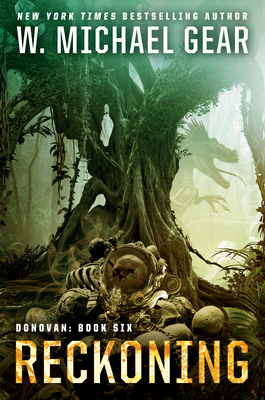 This is book number 6 in the Donovan series.

The sixth book in the thrilling Donovan sci-fi series returns to a treacherous alien planet where corporate threats and dangerous creatures imperil the lives of the colonists.

Three years after Ashanti spaced for Solar System, Turalon reappears in the Donovanian sky. The Corporation has returned. Donovan’s wealth is a lure for the powerful families who control the Board. Unburdened by morals, they are bringing their battle for supremacy to Port Authority and a showdown that could tear The Corporation apart.

Much to her disgust, Falise Taglioni has been chosen to ensure that her family emerges triumphant; she comes with instructions for her brother, Dek. After all, she could always manipulate him to her will. And she will again, even if she has to destroy Talina Perez in the process. And if her war with the Grunnels, Xian Chans, and Radceks destroys Port Authority in the process? Who cares?

But nothing on Donovan is static, and in the three years since Ashanti’s departure, life on the planet has hardened Kalico Aguila and the scrappy inhabitants of Port Authority. Life in the bush breeds a different kind of human, genetically altered, tough, and self-reliant. And on Donovan, determining who is predator, and who is prey has never been easy.

Meanwhile, for Kylee Simonov and her bonded quetzal, Flute, there will be a final comeuppance. Because on Donovan, blood vendetta needs to be paid. And then she’s going to town. After which, nothing will be the same.

W. Michael Gear is the author of over fifty published novels, many of which are co-authored with his beloved wife, Kathleen O'Neal Gear. He is a New York Times, USA Today, and international bestselling author whose work has been translated into 29 languages and has over 17 million copies in print worldwide. Both an anthropologist and archaeologist, he brings extraordinary depth and complexity to his characters and settings.

Praise for the Donovan novels

“What a ride! Excitement, adventure, and intrigue, all told in W. Michael Gear's vivid, compulsively readable prose. A terrific new science-fiction series; Gear hits a home run right out of the park and all the way to Capella.” —Robert J. Sawyer, Hugo Award-winning author of Quantum Night

“A marginal colony on a living world—where human life and human will are tested to the limits. An intriguing and inventive new work from Michael Gear. Recommended!” —C. J. Cherryh, Hugo Award-winning author of Downbelow Station

“Gear kicks off a new sf series by weaving a number of compelling characters into the narrative, including bold heroine Talina Perez and Donovan itself, a planet teeming with danger and delights in turn.... Fans of epic space opera, like Rachel Bach’s Fortune’s Pawn (2013), will happily lose themselves in Donovan’s orbit.” —Booklist

“Dark and gritty, this book shows both the best and worst sides of humanity, all while being emotional and thought-provoking.” —It Starts at Midnight

“It's not easy to create an entire new planet setting and to immediately ground the reader in that world, but Gear makes it look easy.... He strikes an impressive balance between only telling us what we need to know when we need to know it and making this feel like a fully-realized place from the get-go.” —Den of Geek

“The novel's prose is as razor-sharp as Donovan's toothy beasts, its characters deftly defined. The enveloping narrative gallops along at a fierce pace and will make Outpost one of the must-read sci-fi releases of 2018 when it arrives on February 20 from DAW Books.” —SyFy Wire

“A thrilling tale of high-stakes survival on an alien planet.” —Dread Central