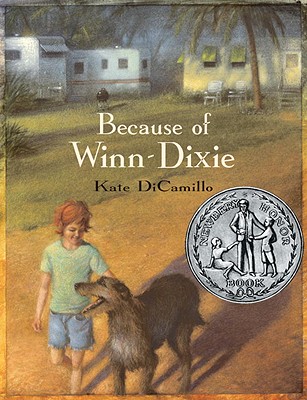 An unforgettable first novel about coming of age one sweet summer—and learning to love what you have.

The summer Opal and her father, the preacher, move to Naomi, Florida, Opal goes into the Winn-Dixie supermarket—and comes out with a dog. A big, ugly, suffering dog with a sterling sense of humor. A dog she dubs Winn-Dixie. Because of Winn-Dixie, the preacher tells Opal ten things about her absent mother, one for each year Opal has been alive. Winn-Dixie is better at making friends than anyone Opal has ever known, and together they meet the local librarian, Miss Franny Block, who once fought off a bear with a copy of WAR AND PEACE. They meet Gloria Dump, who is nearly blind but sees with her heart, and Otis, an ex-con who sets the animals in his pet shop loose after hours, then lulls them with his guitar.

Opal spends all that sweet summer collecting stories about her new friends and thinking about her mother. But because of Winn-Dixie or perhaps because she has grown, Opal learns to let go, just a little, and that friendship—and forgiveness—can sneak up on you like a sudden summer storm.

Recalling the fiction of Harper Lee and Carson McCullers, here is a funny, poignant, and utterly genuine first novel from a major new talent.

"Take one disarmingly engaging protagonist and put her in the company of a tenderly rendered canine and you've got yourself a recipe for the best kind of down-home literary treat. Kate DiCamillo's voice in Because of Winn-Dixie should carry from the steamy, sultry pockets of Florida clear across the miles to enchant young readers everywhere." — Karen Hesse, author of the Newbery-award winner Out of the Dust