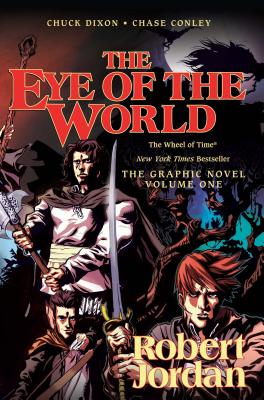 Created with the cooperation of the Jordan estate, adapted by well-known comics writer Chuck Dixon and illustrated by the talented Chase Conley, The Eye of the World: The Graphic Novel has been hailed as an exciting interpretation of Robert Jordan's classic fantasy novel.

The Eye of the World: The Graphic Novel, Volume One begins Robert Jordan's epic tale by introducing Rand al'Thor and his friends Matrim and Perrin at home in Emond's Field, shortly before the spring festival. Moiraine Damodred and Lan Mandragoran appear and almost before Rand knows it, he's fleeing his home village with Moiraine, Lan, his friends, and Egwene al'Vere, the innkeeper's daughter, who wishes to become an Aes Sedai. The conclusion of this volume leaves the travelers on the road to Baerlon, barely ahead of the pursuing Trollocs and Draghkar. But even as they run for their lives, Moiraine and Lan begin to teach the young people what they will need to know to survive in this dangerous world.

The Eye of the World: The Graphic Novel, Volume One contains the first eight issues of The Wheel of Time comic book published by Dynamite Entertainment.

ROBERT JORDAN (1948-2007) is best known for his internationally bestselling epic fantasy series The Wheel of Time®, which has sold over 40 million copies in North America and is currently being adapted for the screen. A native of Charleston, Jordan graduated from The Citadel, the Military College of South Carolina, with a degree in physics. He served two tours in Vietnam with the U.S. Army and received multiple decorations for his service.

Chuck Dixon is a comic book writer best known for his long runs on several Batman titles in the 1990’s for DC Comics. Throughout his prolific career, Dixon has written for Evangeline (Comico Comics), The Savage Sword of Conan, The Punisher War Journal (Marvel Comics), Robin, Nightwing, Detective Comics (DC Comics), and Simpsons Comics (Bongo Comics). Dixon worked closely with Robert Jordan on the graphic adaptation of New Spring and with Jordan’s estate on The Eye of the World graphic novel.

“All of the dialogue is straight out of the book. Dixon is able to make the story flow on the page....All the characters look like how I might imagine them. Fans of the books will be reminded of the things they enjoyed about the series in the first place.” —Geeks of Doom on The Eye of the World comic book