The Devil's Half Mile: A Novel (Justice Flanagan #1) (Hardcover) 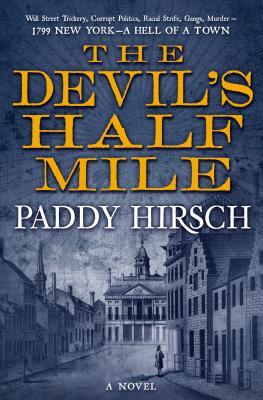 This is book number 1 in the Justice Flanagan series.

The Devil's Half Mile by Paddy Hirsch is a riveting historical thriller debut set in 1799 New York City, perfect for the fans of Gangs of New York and the works of Caleb Carr and Erik Larson.

Seven years after a financial crisis nearly toppled America, traders chafe at government regulations, racial tensions are rising, gangs roam the streets and corrupt financiers make back-door deals with politicians... 1799 was a hell of a year.

Thanks to Alexander Hamilton, America has recovered from the panic on the Devil's Half Mile (aka Wall Street), but the young country is still finding its way. When young lawyer Justy Flanagan returns to solve his father's murder, he exposes a massive fraud that has already claimed lives, and one the perpetrators are determined to keep secret at any cost. The body count is rising, and the looming crisis could topple the nation.

"A thriller with strong, multifaceted heroes and villains, [and] tight plotting. I impatiently await the next adventure."—Patrick Taylor, NYT bestselling author of the Irish Country series

Paddy Hirsch has worked in public radio at NPR and Marketplace for ten years. He came to journalism after serving for eight years as an officer in the British Royal Marines, and lives in Los Angeles. While The Devil's Half Mile is his fiction debut, Hirsh has also written Man vs. Markets, a nonfiction book explaining economics.

"A thriller with strong, multifaceted heroes and villains, [and] tight plotting. I impatiently await the next adventure."—Patrick Taylor, New York Times bestselling author of the Irish Country series

"A tense, violent and atmospheric crime thriller set in 1799 when the white-collar criminals carried switchblades and human lives were traded like sacks of grain."—Michael Robotham, award-winning author of LIFE OR DEATH

"Fast paced and often violently brutal, this tale should please thriller readers who enjoy a twist of history"—Booklist

"A solid choice for historical fiction buffs and lovers of political plots."—Library Journal