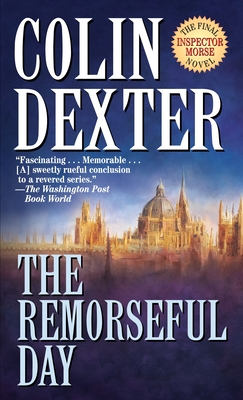 This is book number 13 in the Inspector Morse series.

For a year, the murder of Mrs. Yvonne Harrison at her home in Oxfordshire had baffled the Thames Valley CID. The manner of her death--her naked handcuffed body left lying in bed--matched her reputation as a women of adventuresome sexual tastes. The case seemed perfect for Inspector Morse. So why has he refused to become involved--even after anonymous hints of new evidence, even after a fresh murder? Sgt. Lewis's loyalty to his infuriating boss slowly turns to deep distress as his own investigations suggest that Mrs. Harrison was no stranger to Morse. Far from it. Never has Morse performed more brilliantly than in this final adventure, whose masterly twists and turns through the shadowy byways of passion grip us to the death. . . .

Colin Dexter lives in Oxford, England. He has won many awards for his novels, including the CWA Cartier Diamond Dagger for outstanding achievements in crime literature--the equivalent of a lifetime achievement Edgar Award. This is the thirteenth and final Inspector Morse novel.

"IMPECCABLY PLOTTED . . . A series that raised the bar for genre writing. Not since Nero Wolfe has a detective of Morse's ratiocinative skills, refined tastes, and tetchy temperament held court in such a magisterial fashion."
--The New York Times Book Review

"THE PLOT IS FLAMBOYANTLY CLEVER: even the most minor characters are bizarre and intriguing. Long after his swan song, Morse will be missed."
--Los Angeles Times