"All the Real Indians Died Off": And 20 Other Myths About Native Americans (Myths Made in America) (Paperback) 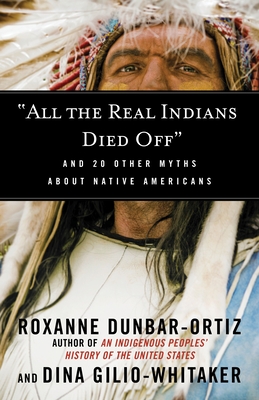 In this enlightening book, scholars and activists Roxanne Dunbar-Ortiz and Dina Gilio-Whitaker tackle a wide range of myths about Native American culture and history that have misinformed generations. Tracing how these ideas evolved, and drawing from history, the authors disrupt long-held and enduring myths such as:

Each chapter deftly shows how these myths are rooted in the fears and prejudice of European settlers and in the larger political agendas of a settler state aimed at acquiring Indigenous land and tied to narratives of erasure and disappearance. Accessibly written and revelatory, “All the Real Indians Died Off” challenges readers to rethink what they have been taught about Native Americans and history.

Roxanne Dunbar-Ortiz, a New York Times best-selling author, grew up in rural Oklahoma in a tenant farming family. She has been active in the international Indigenous movement for more than 4 decades and is known for her lifelong commitment to national and international social justice issues. Dunbar-Ortiz is the winner of the 2017 Lannan Cultural Freedom Prize, and is the author or editor of many books, including An Indigenous Peoples’ History of the United States, a recipient of the 2015 American Book Award. She lives in San Francisco. Connect with her at reddirtsite.com or on Twitter @rdunbaro.

Dina Gilio-Whitaker (Colville Confederated Tribes) is an award-winning journalist and columnist at Indian Country Today Media Network. A writer and researcher in Indigenous studies, she is currently a research associate and associate scholar at the Center for World Indigenous Studies. She lives in San Clemente, CA.

“‘All the Real Indians Died Off’ And 20 Other Myths about Native Americans offers a much-needed and excellent introduction to American Indian history and contemporary life for a broad audience.”
—Against the Current

“I have been looking for a text for our Intro to Native American Studies course that touches on the themes of history, genocide, cultural appropriation, and legal relationship between the United States and indigenous people that would be comprehensible by freshmen. I have finally found it...I cannot wait to teach it.”
—Kerri J. Malloy, lecturer in the Department of Native American Studies at Humboldt State University