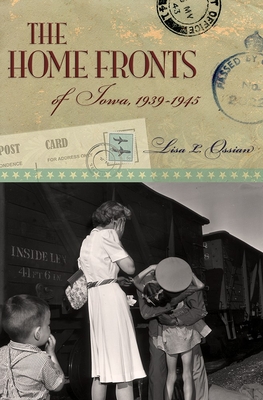 As Americans geared up for World War II, each state responded according to its economy and circumstances—as well as the disposition of its citizens. This book considers the war years in Iowa by looking at activity on different home fronts and analyzing the resilience of Iowans in answering the call to support the war effort.With its location in the center of the country, far from potentially threatened coasts, Iowa was also the center of American isolationism—historically Republican and resistant to involvement in another European war. Yet Iowans were quick to step up, and Lisa Ossian draws on historical archives as well as on artifacts of popular culture to record the rhetoric and emotion of their support.Ossian shows how Iowans quickly moved from skepticism to overwhelming enthusiasm for the war and answered the call on four fronts: farms, factories, communities, and kitchens. Iowa’s farmers faced labor and machinery shortages, yet produced record amounts of crops and animals—even at the expense of valuable topsoil. Ordnance plants turned out bombs and machine gun bullets. Meanwhile, communities supported war bond and scrap drives, while housewives coped with rationing, raised Victory gardens, and turned to home canning.The Home Fronts of Iowa, 1939–1945 depicts real people and their concerns, showing the price paid in physical and mental exhaustion and notes the heavy toll exacted on Iowa’s sons who fell in battle. Ossian also considers the relevance of such issues as race, class, and gender—particularly the role of women on the home front and the recruitment of both women and blacks for factory work—taking into account a prevalent suspicion of ethnic groups by the state’s largely homogeneous population.The fact that Iowans could become loyal citizen soldiers—forming an Industrial and Defense Commission even before Pearl Harbor—speaks not only to the patriotism of these sturdy midwesterners but also to the overall resilience of Americans. In unraveling how Iowans could so overwhelmingly support the war, Ossian digs deep into history to show us the power of emotion—and to help us better understand why World War II is consistently remembered as “the Good War.”

“Lisa Ossian’s book is thoughtful and entertaining. It is a joy to read. Both WWII scholars and Iowans will be amazed at the amount of interesting material she has uncovered.”—Doris Weatherford, author of American Women and World War II

“An exceedingly well-written account on Iowa during World War II. The Home Fronts of Iowa, 1939–1945 is stimulating, provocative, and well worth reading.” —Richard Lowitt, author of The New Deal and the West