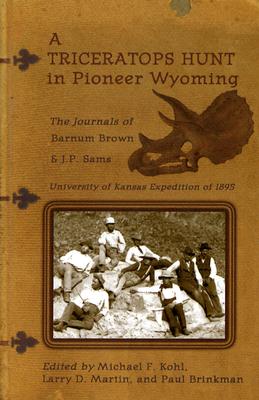 One June morning in 1895, five men made their final goodbyes on a platform in Lawrence, Kansas.

The mena politician, a professor, two students, and an interested citizenwere leaving town for the summer. They would live among the grasslands, badlands, dry, white-bottomed creek beds and Cretaceous rocks of eastern Wyoming, which they hoped to find rich in dinosaur bones.

Two of the studentsBarnum Brown, and Elmer Riggswould go on to lead two of the most important American careers in dinosaur paleontology of the twentieth century. Their professor, Samuel Wendell Williston, was just reaching his prime. For his new museum at the university, Williston wanted the skull of a Triceratopsthe enormous-headed, three-horned, rhino-like dinosaur of the Cretaceous Period, the first of which had been described for science only six years before. What would come to be called the Kansas University Expedition of 1895 would succeed in finding just such a skull.