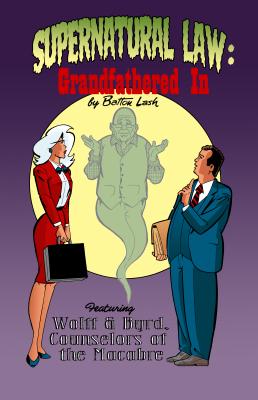 The law firm of Wolff & Byrd, Counselors of the Macabre has a unique practice: defending monsters and the supernaturally afflicted In this full-color original graphic novel, Alanna Wolff and Jeff Byrd take on a case in which a ghost is literally grandfathered in to a home inheritance: Grandpa has died but his ghost won't leave the house, much to the chagrin of his son and daughter-in-law. Meanwhile at the law offices, that landlord wants Wolff & Byrd to leave because their clients are disturbing the other tenants. Readers can expect lots of plot twists and turns and surprising revelation. This is the first new Supernatural Law graphic novel in 5 years.

Cartoonist Batton Lash studied at the School of Visual Arts with comics greats Will Eisner and Harvey Kurtzman. In the 1980s-1990s Batton's Wolff & Byrd, Counselors of the Macabre was a syndicated weekly newspaper strip. It became the comic book Supernatural Law in 1994 and a webcomic in 2007. The stories have been collected into numerous trade paperbacks. Batton has also done comics for Archie (including the famous Archie Meets the Punisher) and for The Simpsons. Batton's latest project is The First Gentleman of the Apocalypse, a new series being serialized in the online comics anthology Aces Weekly. Batton Lash received the Inkpot Award from the San Diego Comic-Con in 2004. He was nominated for two Will Eisner Comic Industry Awards in 1997; in 2002 he won the Eisner for Best Humor Comic, Radioactive Man (Bongo).