Thimble Theatre and the Pre-Popeye Comics of E.C. Segar (Hardcover) 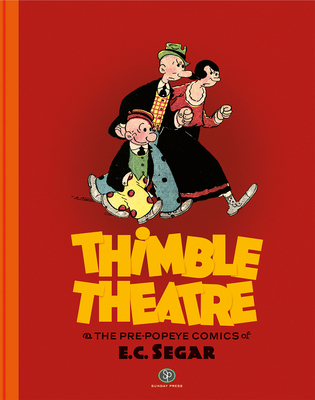 Backordered
(This book cannot be returned.)

More than a decade before he created the world's most famous cartoon sailor, Elzie Crisler Segar began his comics career in the movies. He drew cartoons for silent movie theater slides, the Charlie Chaplin comic strip, and a daily strip about Chicago's movies and entertainment. Then, in 1919, he penned his own "small screen" creation for the newspapers, Thimble Theatre, where Popeye was to be born. This volume features examples of all of E.C. Segar's early comics and illustrations, and over 100 pre-Popeye Thimble Theatre Sunday pages, including the complete run of the famed Western desert saga, a series that rivals his later work in superb art, storytelling and humor. These comics, most of which have never been reprinted before, are now here for the whole popeyed world to see.

E.C. Segar (1894-1938), creator of Popeye, is a member of the Will Eisner Awards Hall of Fame. He was born in Chester, IL in 1894 and passed away in his longtime home of Santa Monica, CA. The National Cartoonists Society created the Elzie Segar Award in his honor, which was awarded annually to a cartoonist who has made a unique and outstanding contribution to the profession.