Suicide of the West: How the Rebirth of Tribalism, Populism, Nationalism, and Identity Politics is Destroying American Democracy (Hardcover) 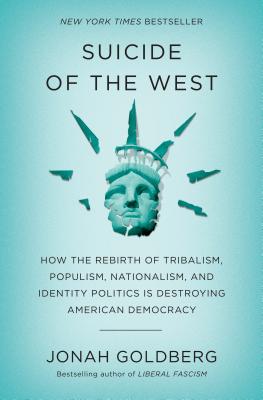 NEW YORK TIMES BESTSELLER • An urgent argument that America and other democracies are in peril because they have lost the will to defend the values and institutions that sustain freedom and prosperity.

Only once in the last 250,000 years have humans stumbled upon a way to lift ourselves out of the endless cycle of poverty, hunger, and war that defines most of history. If democracy, individualism, and the free market were humankind’s destiny, they should have appeared and taken hold a bit earlier in the evolutionary record. The emergence of freedom and prosperity was nothing short of a miracle.

As Americans we are doubly blessed, because the radical ideas that made the miracle possible were written not just into the Constitution but in our hearts, laying the groundwork for our uniquely prosperous society. Those ideas are:

• Our rights come from God, not from the government.
• The government belongs to us; we do not belong to it.
• The individual is sovereign. We are all captains of our own souls, not bound by the circumstances of our birth.
• The fruits of our labors belong to us.

In the last few decades, these political virtues have been turned into vices. As we are increasingly taught to view our traditions as a system of oppression, exploitation, and privilege, the principles of liberty and the rule of law are under attack from left and right. For the West to survive, we must renew our sense of gratitude for what our civilization has given us and rediscover the ideals and habits of the heart that led us out of the bloody muck of the past—or back to the muck we will go.

Jonah Goldberg holds the Cliff Asness Chair in Applied Liberty at the American Enterprise Institute. He is a Los Angeles Times columnist and member of the “Fox News All-Stars,” and he appears regularly on NPR’s Morning Edition. In 2019 Goldberg stepped down as a senior editor at National Review after twenty-one years at the magazine.

“An absolutely magnificent book! Jonah Goldberg is brilliant – both in his intellect and in his writing. Amusing, terrifying, informative and thought-provoking, Suicide of the West is an intellectual oasis of hope in a desert of self-destructive ignorance.”
—Brad Thor, #1 New York Times bestselling author of Spymaster

“Jonah Goldberg’s Suicide of the West is a tour de force. As ever, Goldberg wears his extraordinary erudition lightly as he demonstrates how the ideas that have animated free societies for the past 250 years are the greatest creations of humankind—and how we are imperiling our posterity by the way we mishandle, ignore, and belittle them. This is a very important book.”
—John Podhoretz, Editor, Commentary Magazine

“When future archeologists are digging through our ruins and asking, as they will ask, ‘What the hell were they thinking?’ I hope they come upon a copy of Suicide of the West, and that it is only slightly charred from the bonfire into which the mad idiot ideologues of our time are sure to cast it.”
—Kevin Williamson, National Review correspondent

“Populism and identity politics are not just unpleasant; they are an existential threat to the American way of life. With characteristic wit and erudition, Jonah Goldberg argues that if you value democracy and a free society, you must stand against ideological tribalism, no matter what your politics. Suicide of the West raises an alarm everyone needs to hear, and makes clear the path we need to take.”
—Arthur C. Brooks, President of the American Enterprise Institute

“Understanding where America stands calls for someone with an intellectual lens that can integrate Schumpeter and Fight Club, Karl Marx and Walter White. In Suicide of the West, Jonah Goldberg begins with a compelling thesis, expounds it with massive evidence, and led me to a new and deeper understanding of our predicament. And yet I found myself reading the book for fun. How is it possible with a book this serious? Jonah Goldberg is that good.”
—Charles Murray, author of Coming Apart

“No book better explains this perilous American moment than Jonah Goldberg's Suicide of the West. Deeply researched, beautifully written and brilliantly argued, Goldberg uses trademark logic and humor to explain how the 'miracle' of liberal democracy and capitalism created the conditions for Western thriving and how complacence about the system could hasten its collapse. Equal parts history and polemic, Suicide of the West is a bracing and necessary reminder that the success of the West is neither accidental nor inevitable. It will be one of the most important books of the year.”
—Steve Hayes, Editor-in-Chief of The Weekly Standard and a Fox News Contributor

“That’s what I appreciate about the book…it makes me think, it engages in ideas, and fundamentally what the book is saying is: Don’t throw the baby out with the bathwater.”
—Trevor Noah, “The Daily Show”

“This is the book of the year.”
—New York Post

“It is indeed a serious book with perhaps the rarest of things: the potential to change your mind on any number of subjects. That it is written with great good humor and some laugh out loud moments should not disguise that it is very serious and very important.”
—Hugh Hewitt

“…an important exploration of why we’re giving up the philosophy that built the modern West.”
—Ben Shapiro

“Progressives and conservatives will have their disputes with this book, but the conversations are well worth having.”
—Library Journal (starred review)

"[Suicide of the West] makes a simple, vitally important argument about gratitude and perpetuation. And it synthesizes the research and theories of dozens of sociologists, historians, and economists in a new and helpful way. If Suicide of the West—like Goldberg’s first book, the bestseller Liberal Fascism—comes to be so widely read and debated that it shapes the public understanding of its subject, we will be much better off for it.
—The Weekly Standard