Grace & Steel: Dorothy, Barbara, Laura, and the Women of the Bush Dynasty (Hardcover) 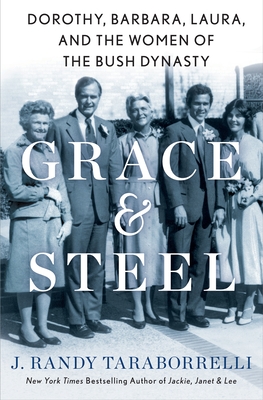 Bestselling author J. Randy Taraborrelli reveals the unsung heroines of the inimitable Bush family dynasty: not only First Ladies Barbara and Laura, but other colorful women whose stories have been left out of history for far too long, including Barbara’s mother-in-law, the formidable Dorothy Bush; the enigmatic Columba and the controversial Sharon; and Laura’s twins, Jenna and Barbara.

No matter the challenges related to power and politics, the women of the Bush dynasty always fought for equality in their marriages as they raised their children to be true to American values. In doing so, they inspired everyday Americans to do the same. Or, as Barbara Bush put it, “The future of this nation does not depend on what happens in the White House, but what happens in your house.”

Details from the book include:

—The tragedy Barbara faced in burying her three-year-old daughter, Robin, and her struggle with depression over the decades that followed.

—The tragic night a teenage Laura Bush accidentally killed a good friend—a story she did not discuss publicly for decades.

—The revelation of the affair that almost doomed George HW's hopes for the presidency.

—The truth behind the fraught relationship between Nancy Reagan and Barbara Bush that culminated in an angry phone call during which Barbara told her she would never speak to her again—and she didn't.

J. Randy Taraborrelli is the author of 20 biographies, most of which have become New York Times bestsellers, including: Jackie, Ethel, Joan: Women of Camelot; After Camelot: A Personal History of the Kennedy Family 1968 to the Present, which was adapted as a mini-series for Reelz; and Jackie, Janet & Lee: The Secret Lives of Janet Auchincloss and Her Daughters, Jacqueline Kennedy Onassis and Lee Radziwill, which he is adapting for television.

“Where Taraborrelli excels is in excavating the personal histories of the three women and how they were forever shadowed by painful episodes in their lives. [The Bush women] created a singular, admirable legacy, and this book portrays them as genuine, struggling human beings.” –Washington Post

“A unique and colorful look at one of America’s most powerful political families.” –Publishers Weekly

“Taraborrelli gives the Bushes the royal treatment...A glossy dissection of the women members of a family that has loomed large over decades of U.S politics.” —Kirkus Reviews

Praise for The Kennedy Heirs:

“Leaves no stone unturned as it retraces the lives of the Kennedy children.” —Hollywood Reporter, “Hollywood’s Top 10 Beach Reads”

"Kennedy followers will be intrigued by this absorbing narrative of the dynasty's continuing hold on American life." —Library Journal (starred)

"In this sprawling post-Camelot account, Taraborrelli details the lives of the third generation—the grandchildren of Joe and Rose Kennedy—as they have tried to live up to Kennedy values…No scandal or luxurious dining room goes overlooked. Kennedy die-hards will love it.” —Kirkus Reviews

Praise for Jackie, Janet, and Lee (currently being developed for TV by Tomorrow Studios)

"Taraborrelli takes an intimate look at the sisters’ complicated relationship with [Aristotle Onassis], and reveals for the first time what really happened when Lee learned her sister was marrying Onassis five years after John F. Kennedy’s death." —Harper's Bazaar

"Taraborrelli captures the glamorous, tragic, seductive and completely absorbing world of the Kennedys and those who married them....irresistible, intimate and revealing." —Shelf Awareness

“Taraborrelli’s gossipy narrative revels in luxurious decor, stunning outfits, and soap-operatic fights in this entertaining saga of how wealthy, fashionable women got that way.” —Publishers Weekly

“A narrative about money and the seemingly unlimited power that goes with it...The aura of Camelot lives on in a book for Kennedy completists and those who enjoy tales of the rich and powerful.” —Kirkus Reviews