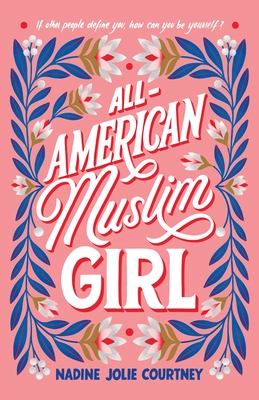 Nadine Jolie Courtney's All-American Muslim Girl is a relevant, relatable story of being caught between two worlds, and the struggles and hard-won joys of finding your place.

Allie Abraham has it all going for her—she’s a straight-A student, with good friends and a close-knit family, and she’s dating popular, sweet Wells Henderson. One problem: Wells’s father is Jack Henderson, America’s most famous conservative shock jock, and Allie hasn’t told Wells that her family is Muslim. It’s not like Allie’s religion is a secret. It’s just that her parents don’t practice, and raised her to keep it to herself.

But as Allie witnesses Islamophobia in her small town and across the nation, she decides to embrace her faith—study, practice it, and even face misunderstanding for it. Who is Allie, if she sheds the façade of the “perfect” all-American girl?

Nadine Jolie Courtney is the author of the YA novel Romancing the Throne. A graduate of Barnard College, her articles have appeared in Town & Country, Robb Report, and Angeleno. She lives in Santa Monica, California.

“The book handles the complexity and intersectionality of being a Muslim American woman with finesse, addressing many aspects of identity and Islamic opinions. . .While grounded in the American Muslim experience, the book has universal appeal thanks to its nuanced, well-developed teen characters whose struggles offer direct parallels to many other communities. Phenomenal.” —Kirkus Reviews, starred review

“Courtney examines matters of subtle and blatant Islamophobia, privilege and erasure, and questions of faith and identity with a sensitivity born of experience and respect.” —Publishers Weekly, starred review

“#Ownvoices author Courtney incorporates a diversity of backgrounds and viewpoints among Allie’s Muslim friends and family, creating a vibrant cast of characters who compellingly portray the individual nuances of religious experience. The result is a layered and thoughtful exploration of spiritual awakening that never condescends to teen readers, exploring feminism, prayer, and religious ritual, family bonds across cultures and generations, white privilege, LGBTQ inclusion, and grief in authentic and heartfelt ways. . .Religion is rarely handled with such wisdom and depth in YA, or discussed so lovingly.” —School Library Journal, starred review

“Courtney, herself a Circassian Muslim, writes with thoughtfulness and immediacy about the quandary of Allie’s identity as she negotiates messaging from different directions…The book is particularly gifted at documenting Allie’s exploration of faith; her spiritual quest is treated with unusual depth and high readability…Between its sharp and sympathetic exploration of identity and its interesting interrogation of the undertreated topic of faith, this will resonate with many readers, and it may encourage young people to consider their own spiritual paths.” —The Bulletin of the Center for Children's Books, starred review

“There's a lot to unpack here, but isn't there always when it comes to religion and politics? Courtney does so with poise, naturally integrating genuinely informative context into the story. . .Readers trapped between two worlds, religious or not, will find solace here.” —Booklist