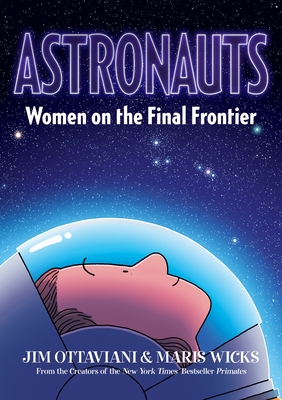 In the graphic novel Astronauts: Women on the Final Frontier, Jim Ottaviani and illustrator Maris Wicks capture the great humor and incredible drive of Mary Cleave, Valentina Tereshkova, and the first women in space.

The U.S. may have put the first man on the moon, but it was the Soviet space program that made Valentina Tereshkova the first woman in space. It took years to catch up, but soon NASA’s first female astronauts were racing past milestones of their own. The trail-blazing women of Group 9, NASA’s first mixed gender class, had the challenging task of convincing the powers that be that a woman’s place is in space, but they discovered that NASA had plenty to learn about how to make space travel possible for everyone.

Jim Ottaviani has written fifteen (and counting) graphic novels about scientists. His most recent books include Naturalist (with E.O. Wilson), Astronauts: Women on the Final Frontier, Hawking, The Imitation Game, a biography of Alan Turing, Primates, about Jane Goodall, Dian Fossey, and Biruté Galdikas; and Feynman, about the Nobel-prize winning physicist, artist, and raconteur. His books are New York Times bestsellers, have been translated into a dozen languages, and have received praise from publications ranging from Nature and Physics World to Entertainment Weekly and Variety.

Jim lives in Michigan and comes to comics via careers in nuclear engineering and librarianship.

Maris Wicks lives in sunny Somerville, Massachusetts. She is the author behind Human Body Theater, as well as the illustrator of New York Times Bestselling Primates, with Jim Ottaviani. Wicks has also created comics for Spongebob Comics, DC and Marvel. When Maris is not drawing comics, she can be found prepping slides for her collection of vintage microscopes.

"Exhilarating—as well as hilarious, enraging, or both at once depending on the reader. "—Kirkus, starred review and a Best Book of 2020

"Gobs of humor, lively artwork, and tidy explanations of the science make this a standout among the vast field of books about the U.S. space program." —Booklist, starred review

"Readers will be intrigued and inspired to dive into further research to understand some of the jargon and learn more about the women profiled here... A stellar addition to all collections." —School Library Journal, starred review

"With plenty of eye-rolling takes on male-designed spacecraft faux pas and enthusiastic crew reveling in flight adventures, Ottaviani and Wicks drive home the message that it’s all about teamwork, and no team can function without diverse members."—The Bulletin of the Center for Children's Books