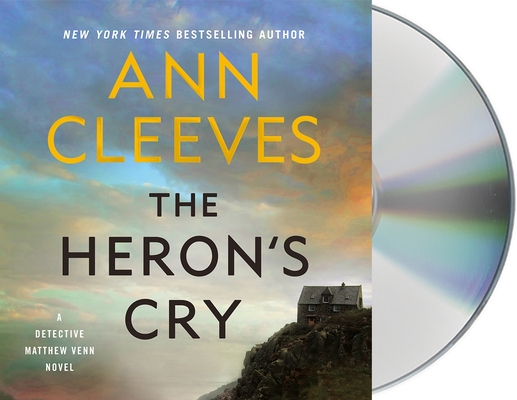 This is book number 2 in the The Two Rivers Series series.

New York Times bestseller Ann Cleeves returns with The Heron's Cry, the extraordinary follow-up to The Long Call, soon to be a major TV series, alongside her two hit TV shows Shetland and Vera.

"A complex mystery full of surprises . . . this character-driven exploration of people's darkest flaws is a sterling example of Cleeves' formidable talents." —Kirkus Reviews

"Jack Holden demonstrates his full talents in this mystery, bringing the extensive cast of characters in this small and close-knit community in Devon to life with his strong narration." —Audiofile

North Devon is enjoying a rare hot summer with tourists flocking to its coastline. Detective Matthew Venn is called out to a rural crime scene at the home of a group of artists. What he finds is an elaborately staged murder--Dr Nigel Yeo has been fatally stabbed with a shard of one of his glassblower daughter's broken vases.

Dr. Yeo seems an unlikely murder victim. He's a good man, a public servant, beloved by his daughter. Matthew is unnerved, though, to find that she is a close friend of Jonathan, his husband.

Then another body is found--killed in a similar way. Matthew soon finds himself treading carefully through the lies that fester at the heart of his community and a case that is dangerously close to home.

DI Matthew Venn returns in The Heron's Cry, in Ann Cleeves powerful next novel, proving once again that she is a master of her craft.

ANN CLEEVES is the multi-million copy bestselling author behind three hit television series—Shetland, starring Douglas Henshall, Vera, starring Academy Award Nominee Brenda Blethyn, and The Long Call, starring Ben Aldridge—all of which are watched and loved in the United States. All three are available on BritBox.

The first Shetland novel, Raven Black, won the Crime Writers' Association Gold Dagger for best crime novel, and Ann was awarded the CWA Diamond Dagger in 2017. She was awarded the OBE in 2022 for services to reading and libraries. Ann lives in the United Kingdom.

Jack Holden is an actor and writer from London. His West End credits include the National Theatre's War Horse and the Almeida Theatre's Ink. He has also performed at the RSC, Bristol Old Vic and toured extensively around the UK. Cruise was his West End debut as a playwright.