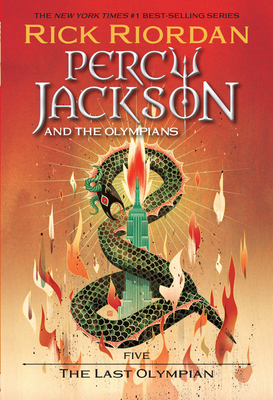 Don't get left behind! Read the Percy Jackson series before the Disney+ series comes out. You'll be proud to be seen with this stunning paperback edition.

*"Riordan masterfully orchestrates the huge cast of characters and manages a coherent, powerful tale at once exciting, philosophical and tear-jerking. The bestselling series's legions of fans will cheer their heroes on and rejoice in such a compelling conclusion to the saga." --Kirkus Reviews (starred review)

All year the demigods have been preparing for battle against the Titans, knowing the odds are against them. Kronos is stronger than ever, and with every god and half-blood he recruits, his power only grows.

In this momentous final book in the New York Times best-selling series, the prophecy surrounding Percy’s sixteenth birthday unfolds. And as the battle for Western civilization rages on the streets of Manhattan, Percy faces a terrifying suspicion that he may be fighting against his own fate.

Whether you are new to Percy or a longtime fan, this gorgeous paperback edition is a must-have for your library.

Complete your collection with:

Rick Riordan, dubbed “storyteller of the gods” by Publishers Weekly, is the author of five #1 New York Times best-selling middle grade series with millions of copies sold throughout the world: Percy Jackson and the Olympians, The Heroes of Olympus, and the Trials of Apollo, based on Greek and Roman mythology; the Kane Chronicles, based on Ancient Egyptian mythology; and Magnus Chase and the Gods of Asgard, based on Norse mythology. Rick collaborated with illustrator John Rocco on two #1 New York Times best-selling collections of Greek myths for the whole family: Percy Jackson’s Greek Gods and Percy Jackson’s Greek Heroes. His most recent book is Daughter of the Deep, a modern take on Jules Verne's 20,000 Leagues Under the Sea. Rick is also the publisher of an imprint at Disney-Hyperion, Rick Riordan Presents, dedicated to finding other authors of highly entertaining fiction based on world cultures and mythologies. He lives in Boston, Massachusetts with his wife and two sons. Follow him on Twitter at @RickRiordan.

Victo Ngai is a Forbes 30 Under 30 honoree, Society of Illustrator New York Gold Medalist, and Hugo and World Fantasy Award finalist. Originally from Hong Kong, she graduated from the Rhode Island School of Design and is now based in Los Angeles. She illustrates for newspapers and magazines, creates storyboards and art for animation, provides book cover art, and works on packaging and advertisement campaigns. Victo has also taught at the School of Visual Art in New York and frequently gives guest lectures at universities and workshops at conferences. Follow her on Twitter and Instagram @victongai.

*"Riordan masterfully orchestrates the huge cast of characters and manages a coherent, powerful tale at once exciting, philosophical and tear-jerking. The bestselling series's legions of fans will cheer their heroes on and rejoice in such a compelling conclusion to the saga."—Kirkus Reviews (starred review)