The Forty Sieges of Constantinople: The Great City's Enemies and Its Survival (Hardcover) 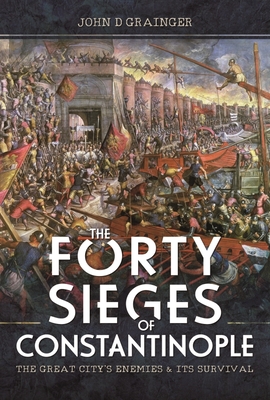 The great city of Byzantion/Constantinople/Istanbul stands on a commanding cape overlooking a busy waterway. It has been the target of repeated attempts to capture it for the past two and a half millennia. Most of these attacks failed, but some did so in spectacular fashion, such as the great Arab sieges. The inhabitants fought hard in almost every siege, with the result that when the city was captured it was also destroyed, or at least suffered a hideous sack. Almost every nation between the Atlantic and the Steppes of Asia have made attempts to capture the city, some repeatedly but only a few - a Roman emperor, the Crusaders, the Turks - have succeeded. And there is no sign that some have given up the hope of taking it - the last sieges were just before and then during the Great War, by the Bulgars, and then by the Allies, who got no closer than Gallipoli, but the city had to submit to enemy occupation when the empire it ruled collapsed. It is still surrounded by envious neighbors, who wish to control it. The city has been besieged forty times, and has been captured on three or four occasions; it cannot be said to be safe yet. It is still 'The City of the World's Desire'.