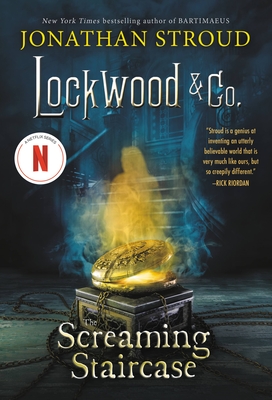 This is book number 1 in the Lockwood & Co. series.

SOON TO BE A NETFLIX SERIES

A sinister Problem has occurred in London: all nature of ghosts, haunts, spirits, and specters are appearing throughout the city, and they aren't exactly friendly. Only young people have the psychic abilities required to see-and eradicate-these supernatural foes. Many different Psychic Detection Agencies have cropped up to handle the dangerous work, and they are in fierce competition for business.

In The Screaming Staircase, the plucky and talented Lucy Carlyle teams up with Anthony Lockwood, the charismatic leader of Lockwood & Co, a small agency that runs independent of any adult supervision. After an assignment leads to both a grisly discovery and a disastrous end, Lucy, Anthony, and their sarcastic colleague, George, are forced to take part in the perilous investigation of Combe Carey Hall, one of the most haunted houses in England. Will Lockwood & Co. survive the Hall's legendary Screaming Staircase and Red Room to see another day?

Readers who enjoyed the action, suspense, and humor in Jonathan Stroud's internationally best-selling Bartimaeus books will be delighted to find the same ingredients, combined with deliciously creepy scares, in his thrilling and chilling Lockwood & Co. series.

Jonathan Stroud (www.jonathanstroud.com) is the author of four previous books in the Lockwood & Co. series as well as the New York Times bestselling Bartimaeus books, and the stand-alone titles Heroes of the Valley, The Leap, The Last Siege, and Buried Fire. He lives in England with his wife and three children.

"This story will keep you reading late into the night, but you'll want to leave the lights on. Stroud is a genius at inventing an utterly believable world which is very much like ours, but so creepily different. Put The Screaming Staircase on your 'need to read' list!" Rick Riordan

"A pleasure from tip to tail, this is the book you hand the advanced readers that claim they'd rather read Paradise Lost than Harry Potter. Smart as a whip, funny, witty, and honestly frightening at times, Stroud lets loose and gives readers exactly what they want. Ghosts, kids on their own without adult supervision, and loads of delicious cookies." Elizabeth Bird, School Library Journal

"Stroud shows his customary flair for blending deadpan humor with thrilling action, and the fiery interplay among the three agents of Lockwood & Co. invigorates the story (along with no shortage of creepy moments)."
Publishers Weekly

"Three young ghost trappers take on deadly wraiths and solve an old murder case in the bargain to kick off Stroud's new post-Bartimaeus series. The work is fraught with peril, not only because a ghost's merest touch is generally fatal, but also, as it turns out, none of the three is particularly good at careful planning and preparation. A heartily satisfying string of entertaining near-catastrophes, replete with narrow squeaks and spectral howls."
Kirkus Reviews

"...Stroud writes for a younger audience in book one of the Lockwood & Co. series and delivers some chilling scenes along the way."
Booklist