365 Things to Do with LEGO Bricks: Lego Fun Every Day of the Year (Hardcover) 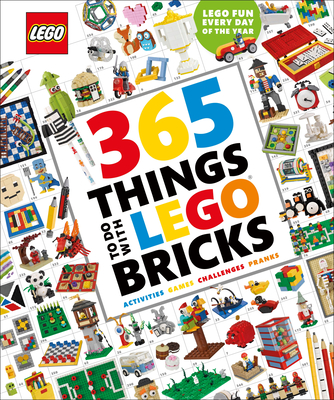 Winner of the Best Book category Creative Play Awards 2016, this superb LEGO build book inspires you to look at your LEGO bricks in new and exciting ways.

Go on a LEGO treasure hunt. Create and perform LEGO magic tricks. Make a LEGO stop-motion movie. Build your own LEGO pet. Challenge your family to build the tallest LEGO tower—and much, much more!

Featuring imaginative play and building ideas—from LEGO games that take just a few minutes and require a handful of bricks, to inspirational build ideas and activities to keep you occupied for hours.

Simon Hugo is a former senior editor of the official Star Trek Magazine and other film and TV tie-in titles, including Star Wars Insider and Torchwood: The Official Magazine. He has written for Doctor Who Adventures and Doctor Who Monster Invasion, and also authored Marvel’s Spider-Man: Adventures of the Web-Slinger, published by DK.

Alice Finch took the LEGO® world by storm when she unveiled one of the largest LEGO models ever built by a single person; a minifigure-scale LEGO Hogwarts School of Witchcraft & Wizardry. She is a master LEGO builder and contributor to DK's LEGO Awesome Ideas. She lives with her family in Seattle, Washington.

Rod Gillies lives in Edinburgh in Scotland. He is best known in the LEGO world for his steampunk and microscale creations, and being a contributor to The Brothers Brick blog. He has built models for a number of the DK LEGO books, including the LEGO Play and LEGO Awesome Ideas books. When he's not building, he writes, and is the author of a trilogy of adventure novels. In the real world, he works in innovation and marketing for one of the world's biggest brewers.